Why Labour is truly progressive on food and farming 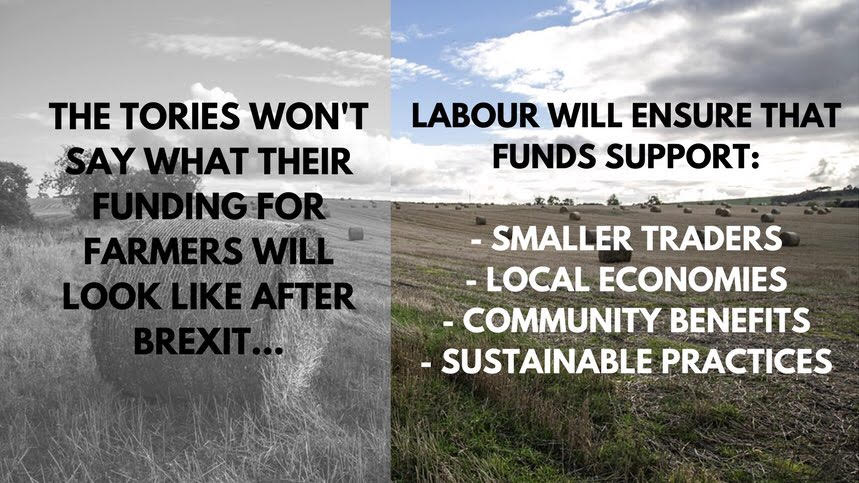 Labour has often been criticised for not caring about farmers or rural issues. But I’m proud to say that the Labour manifesto shows real leadership in making farming greener, working on reducing food poverty and improving childhood nutrition.

This is in stark comparison to the Tory manifesto, which offers few details, no plan for agricultural funding after Brexit and general uncertainty for farmers.

Under a Labour Government agricultural subsidies would not simply go to landowners for owning and farming the land – but instead would be tailored to prioritise a sustainable, long-term future for agriculture, as well as supporting practices which benefit the local community and society as a whole.

In future payments will be used to support smaller traders – exactly the type of small family farms that we have huge numbers of here in Wales where I live, local economies and above all, sustainable practices on farm.

We are therefore likely to see a growth in higher animal welfare farming, organic farming and larger environmental benefits coming from our farming systems. This won’t just benefit our environment, but will also save us huge amounts of money in the long term. The £130m cost per year of cleaning-up pesticides in water could, for example, be dramatically reduced.

It’s not only in food production that Labour has been progressive. The manifesto also commits to allowing EU workers employed across farming, fishing and food manufacturing to remain in the UK. This allows farm businesses to plan at a time of great uncertainty  - all those large fruit farmers, and potato growers know with Labour that their work force will not be at risk post-Brexit. The Tories have made absolutely no commitment to any EU citizens in the UK making it impossible for farmers and growers to plan.

In addition under Labour, company directors would not only have a duty to their shareholders but also to the environment – this could change the face of retailing and food manufacturing as green processes become enshrined in food production.

The Labour manifesto also commits to ensuring Brexit will not be used as an excuse to undercut British farmers and flood Britain’s food chain with imports produced to lower standards. Given that Jacob Rees-Mogg said just last month that Brexit gives us the opportunity to “import cheap beef from Australia, Argentina, and the USA” farmers will be delighted to hear that Labour takes the opposite approach.

The Tories have re-emphasised their credentials as the nasty party by promising to remove Universal infant free school meals in their manifesto. This would not only deal an enormous blow to hard-pressed school budgets – many schools had to go the expense of upgrading their kitchens or installing new ones at great expense to implement the policy but they were encouraged by Ministers at the time who said schools could “plan confidently in the knowledge that we are making a long-term policy commitment.”

It wasn’t a long term commitment at all – another U-turn in fact.  In contrast, Labour has committed to roll out Universal free school meals to ALL primary school students. Labour recognises the improvement in performance and the contribution to tackling obesity that a healthy lunch-time meal can make.

Labour has also committed to publishing a new childhood obesity strategy within the first 100 days, with proposals on advertising and food labelling and a commitment to implement the sugar tax.

Further progressive policies include expanding the role of the Groceries Code Adjudicator to ensure suppliers and consumers get a fair deal, the return of the Agricultural Wages Board and ensuring a million trees of native species are planted to promote biodiversity and better food.

From international trade to small business, Labour’s manifesto commitments on food and farming will result in a more resilient and greener farming sector and a food system that enables us to reduce food poverty and obesity in the UK.

Catherine Fookes is a member of SERA’s Executive Committee