Time to wake up! Global emissions are still rising and the government remains complacent

Barry Gardiner is Shadow Secretary of State for International Trade and Minister for International Climate Change. He is Labour MP for Brent North and tweets at @BarryGardiner. Barry's article originally featured in SERA's New Ground magazine exclusively to SERA members. 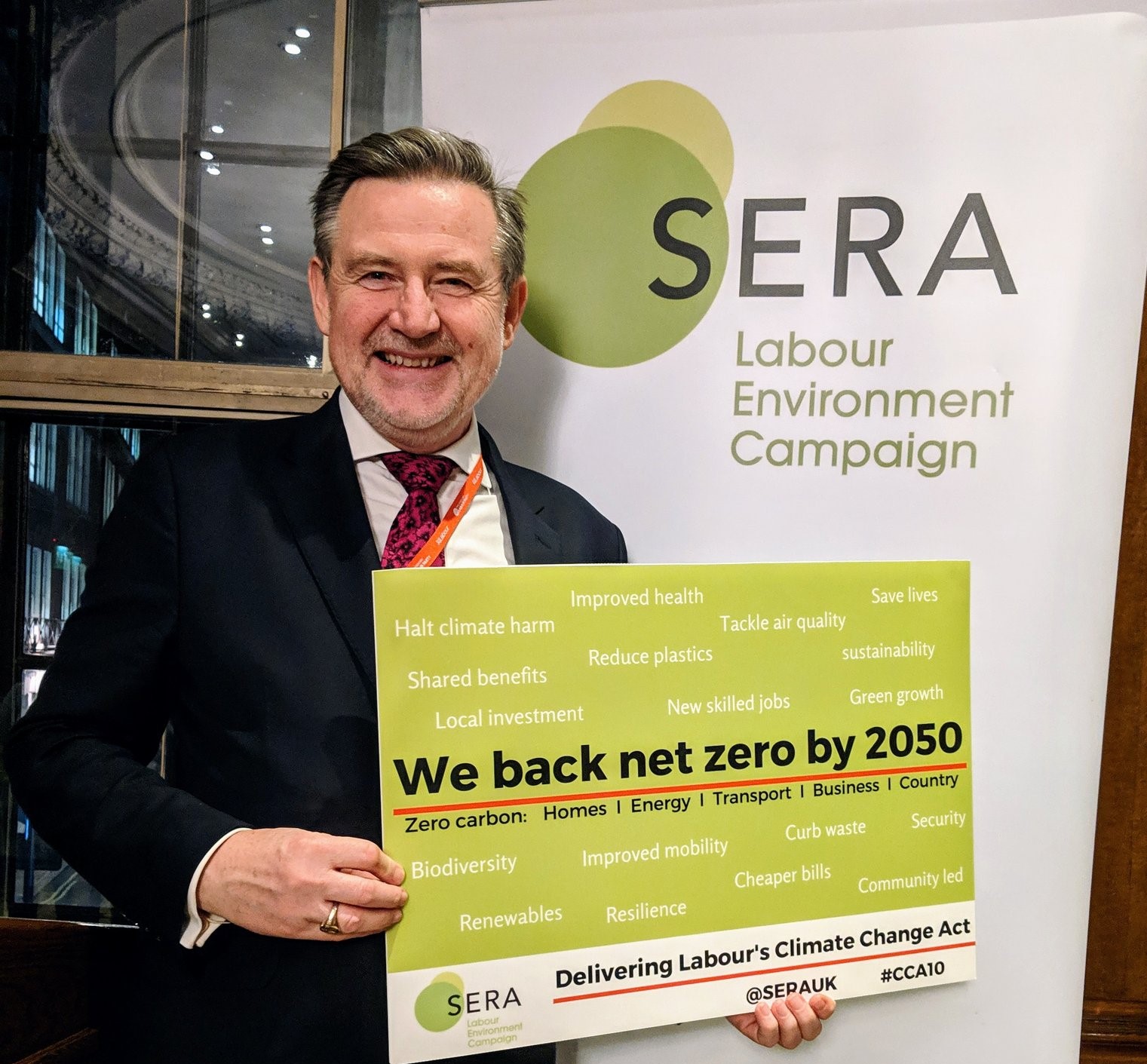 It’s ten years on from the 2008 Climate Change Act. Time perhaps you might think, to reflect and celebrate all the progress we have made. Time to reflect that the UK has cut emissions of greenhouse gases by 43 percent since 1990 whilst growing our economy: achieving the Holy Grail of decoupling economic growth from carbon emissions.

Better still - wake up! Global greenhouse gas emissions haven’t fallen; they haven’t even flatlined. They are on the rise. In fact, when you look more closely at the UK, even our reduction in emissions production can be interpreted another way. The British economy has moved rapidly from a manufacturing base towards the services sector. This means that more of the goods we buy and use are now produced overseas. So, it can be claimed that instead of reducing emissions, we have simply offshored them. From that perspective, the UK’s carbon footprint has barely changed at all since the 1990s.

All this is not to deny the significance of 2008. There has been real progress: the move away from coal fired power stations, the emergence of electric vehicles, the plunging costs of renewables has far exceeded what most people thought possible. And yes, the Climate Change Act was a big part of why all that happened. It was, and still is, a world-leading piece of legislation and certainly one of the greatest legacies of the last Labour government.

Labour’s 2008 Act provided the template to achieve just that. Instead of the finger wagging of a top-down set of obligations that was proposed in the failed Copenhagen climate negotiations of 2009, the world moved in the 2015 Paris climate negotiations to a set of voluntary promises: the not-so-snappily named “Intended Nationally Determined Contributions”! These INDCs were the bottom-up responses made by countries in light of the scientific evidence that set in place the 2°C target. This was the astonishing achievement of the Paris Agreement. Everyone knew the INDCs were not enough — at best they would still see warming of between 2.7 and 3.4°C — but even the most recalcitrant countries had pledged something. And now with unanimous support, the world leaders committed to a process of ratcheting up their efforts. This ratcheting process was both in terms of increasing their emissions reduction efforts but also critically, what had seemed like a throwaway line in the 2009 Copenhagen Accord about further investigation into the possibility of a 1.5°C threshold now took hold in a commitment to stay within that more ambitious temperature limit of 1.5°C.

Last month’s report by the Intergovernmental Panel on Climate Change showed us what this means. On current trends, we are at risk of passing the 1.5°C threshold as soon as 2030, in little over a dozen years’ time. This is the challenge that the world must rise to: 12 years to stop climate change.

You might imagine that our government would once again wish to set an example and lead the world in rising to this much tougher test. You would be wrong. The government’s response was quite properly to ask the independent Committee on Climate Change to advise on what action it should take to respond to the IPCC report. And then to quite improperly instruct the CCC that it should not recommend anything that would alter the carbon budgets that have already been set. But those carbon budgets already cover the period of the next 12 years! Neither Swift nor Kafka could have parodied such a ridiculous position. It is beyond parody. The government is told there is 12 years to save the planet and it says we will consider changing its plans in 12 years’ time!

The inescapable fact is that we are now closer than ever before to catastrophic climate breakdown. And the government seems think that anything we may do here in the UK to reduce emissions and mitigate climate change will not matter unless the rest of the world joins us so there is no point doing anything until everyone else does.

Certainly, the architects of the global consensus achieved in Paris have passed their legacy to a generation of newcomers that are not as convinced of the urgency with which this crisis must be averted. Obama is out. Merkel barely clings on. Next year’s UN climate conference takes place in a Brazil that just elected Jair Bolsonaro as president: another politician who has threatened to withdraw from the Paris Agreement.

With isolationism in the ascendancy, many in the environmental movement have invested their faith in the mantra that “small is beautiful”. In the USA where Trump has abandoned the federal program and is resiling from the international agreement there is much talk of the subnational and non-state actors – communities, towns, cities – picking up the pieces.

But while grassroots and local-scale activity is necessary, it is not sufficient. No amount of tinkering around the edges could possibly deliver what is required. The IPCC report on 1.5°C called for “rapid and far-reaching” systemic changes to our global economic and political structures.

So, whilst it is true that the UK going it alone is simply not enough and we need a global solution to a global problem, it is morally negligent of our government to simply hold its hands up and say we will wait. Politics is about leadership. And so is economics. It is called first mover advantage!

This leadership is precisely what the Labour Party offers: a green jobs revolution that will radically decarbonise our society, insulating 4 million homes to high energy efficiency standards in our first term, unleashing seven times as much offshore wind power, and creating more than 400,000 high-quality, unionised jobs in the wind, solar and energy efficiency sectors.

It is a transformative domestic vision. It will also position us internationally to capture a large share of global demand for the technology and the skills required to move all countries onto a low-carbon pathway. Perhaps the toughest task ahead of a future Labour government is to now bring together every nation to join us on the path to net zero emissions.

Labour is determined that Britain should be at the forefront of the new climate economy, a true global leader recognised as such. Achieving this means looking at all aspects of our international relations and seeing how we could empower outward facing departments – International Trade, International Development, the Foreign Office – to accelerate climate action.

These departments have been neglected by the Conservatives. On Boris Johnson’s watch, the number of full-time officials working on climate change in the Foreign Office dropped by 25 percent. And unlike the Tories, which in previous years sent a fifth of aid abroad to fund fossil fuel projects, a Labour-led DFID will fully divest from using aid money to build polluting oil and gas infrastructure that deteriorates air quality in the developing world and hastens the breakdown of our climate.

As Shadow International Trade Secretary, I want the Department to work with, not against, our radical climate agenda. How was it that the Tories (and their Liberal coalition partners) allowed 99.4 percent of the UK’s export credit financing for energy in developing countries to go to fossil fuels. That’s nearly £3 billion worth of financing for fossil fuel projects. This undermines our commitment to the Paris Agreement and our international pledge, as a G20 member, to eliminate fossil fuel subsidies. In fact, the government denies the very existence of any subsidies to the fossil fuel industry.

A Labour government will get our priorities right. That’s why we will redirect UK Export Finance support for energy towards low carbon projects. This is just one small part of our plan to reform the global trading system so that it protects, not degrades, our environment. In September, I went to the World Trade Organisation to launch the Just Trading initiative – a new progressive manifesto for trade. It is a vision where trade deals can create a virtuous cycle of prosperity and development that will set the foundation on which we can build a truly sustainable future.

This embodies Labour’s agenda: transformative, outward-looking and radical. Those values must also define our approach to climate change on the world stage. Ten years ago, Labour’s Climate Change Act was a ground-breaking moment in the history of environmentalism. It made us climate leaders. This Tory government has been resting on our laurels!

The IPCC report must give a new urgency to politics. With limited time to avoid the human catastrophe that we now know will result if we exceed the 1.5°C threshold and the international scene now dominate by moral pygmies, the UK must step forward and lead the way through the darkness. Unafraid to confront allies that drag their feet. Bold in our assistance to countries whose very existence is threatened by rising seas.

We, the Labour Party. The party of internationalism and solidarity. The party that believes in the power of collective action across borders. Knowing that by the strength of our common endeavour we can achieve more than we could ever do alone. This is who we are. And that is why the next Labour government cannot come a moment too soon.