Sadiq Khan: My Vision for a Greener London

As the capital's T-Charge comes into force, the Mayor of London Sadiq Khan writes for SERA about why ambition on the environment is at the top of his mayoral agenda. 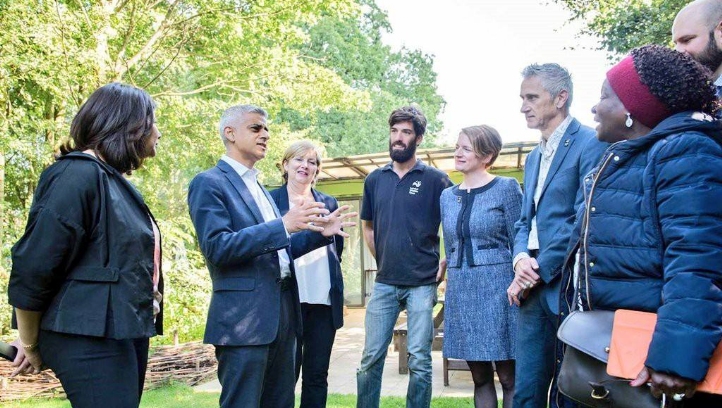 The Mayor at the launch of London's draft Environment Strategy in Woodberry Downs, Hackney, earlier this year

Today around 55 per cent of the world’s population live in cities and that number is only set to grow in the years ahead. That means if we’re going to make strides in tackling the big environmental challenges of our time, major cities like London have a crucial role to play.

From introducing low-emission vehicles to installing sustainable infrastructure and making public transport greener, big cities are already taking the lead and harnessing the latest technological solutions to protect our environment.

In an age when national governments are refusing to meet the challenge and the US has announced its withdrawal from the Paris climate agreement, this action is vital not just for the future survival of the planet but for our health and wellbeing today.

Since being elected Mayor, one of my top priorities has been bringing forward a range of bold measures to combat climate change and address the scourge of air pollution.

London is the greatest city in the world, but I want to see it become one of the greenest, and for us to regain our past global reputation for being at the forefront of environmental action.  As part of this, I recently published my draft environmental strategy - setting out the steps I intend to take to achieve this ambition.

London’s environment and the quality of our air have undoubtedly come a long way since our city was blighted by the Great Stink of the Victorian era or the 1952 Great Smog.  Innovations in urban design and the introduction of tough EU regulations have helped to drastically reduce industrial pollution and have made our city a cleaner, greener, more pleasant place to live.

But while recent decades have seen significant improvements, today London is still confronted by a host of environmental challenges that are as severe and pressing as these previous crises.

The current poor state of London’s air is nothing short of a public health emergency.  More than 9,000 people lose their lives prematurely every year as a direct result of air pollution – and it is having a particularly negative impact on children, stunting lung growth for life.

Research also shows that some of the worst pollution hotspots are around schools and that London’s most deprived communities are among the hardest hit – meaning poverty and pollution are combining to limit the life chances of countless young Londoners.

In the 21st century – in a city like London – this situation is unacceptable. When people’s health is at stake, we can’t shy away from doing the right thing.  As Mayor, I feel I have a duty – a moral responsibility – to act.

So from 2017, we are planning a new levy on the oldest and most polluting vehicles entering central London.  We are also proposing a new and expanded Ultra Low Emission Zone to tackle air pollution.

We are investing record sums in public transport and green infrastructure, by making walking and cycling easier for Londoners, and by phasing out dirty diesel buses - replacing them with brand new lower and zero-emission models.  I’ve also been vocal in calling for the Government to ensure no weakening of our environmental regulations post-Brexit.

We are committed to boosting London’s green economy and working with local boroughs, London’s businesses, NGOs and community organisations, as well as anyone else who is serious about preserving our natural inheritance, protecting our green spaces and cutting harmful emissions.

I am determined to lead by example. And so we are embedding the latest green thinking at the heart of London’s new transport strategy, setting ourselves a target of making London a zero-waste city by 2030 and also starting to work on establishing Energy for Londoners, which will help people across London access renewable energy at fairer and more affordable prices.

Of course, none of this is going to be easy.  We face a massive challenge and it will require a concerted long-term effort and co-operation between a wide range of partners.  But I am optimistic that by working together we can make a real difference.

The truth is we all have a shared interest and a role to play in cleaning up our air and meeting our aspiration of turning London into a zero-carbon city by 2050.

In the 1950s, great politicians and Londoners implemented bold proposals to save lives and to bring an end to the great smogs. Now it’s our turn to act.

Not only do we owe it to today’s Londoners to create a clean healthy environment, where the air is safe to breathe for all and where everyone can fulfil their potential, but we owe it to the next generation too.

This is a battle we can - and must - win

Sadiq Khan is the Labour Mayor of London.

You can have your say on London's draft Environment Strategy here. Responses close on the 22nd November