Reporting back on Manchester's Green Summit

Lydia Meryll, SERA executive member and trustee of Manchester Environmental Education Network (MEEN) took a leading role in the formation and organisation of a groundbreaking Green Summit hosted by Greater Manchester Mayor Andy Burnham. She reports back on a day that saw the wind turbine turning towards a world-leading zero-carbon city. 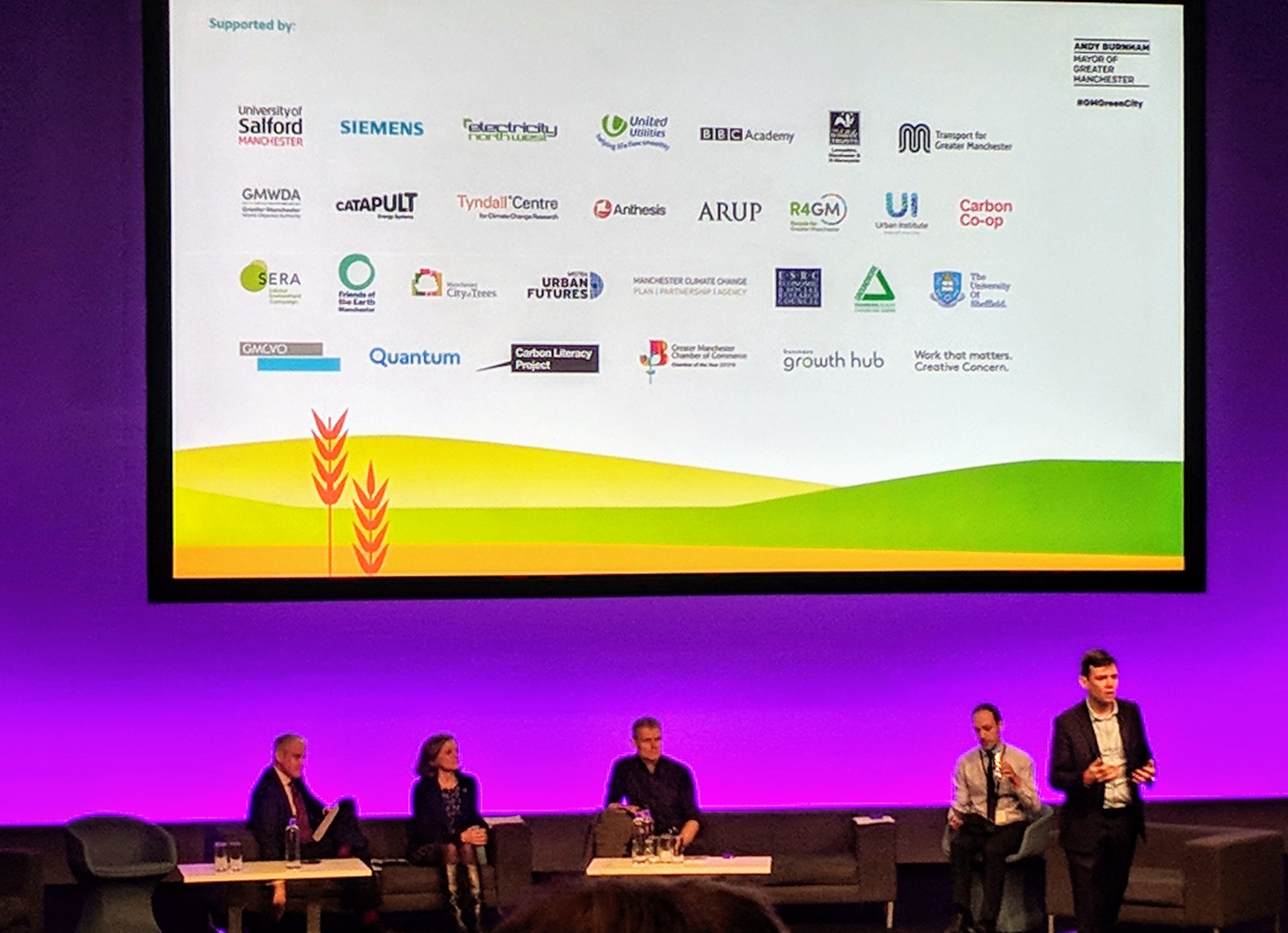 SERA convened a hustings meeting with Andy Burnham before the Mayoral elections in order for him to meet the activists, educationists and committed local business leaders who have achieved innovative ways of dealing with climate change in the Manchester area. Andy pledged at SERA’s manifesto event to hold a Green Summit if elected, SERA were on the steering-group, taking a lead role in the organisation of the event and were pleased to be there when it took place this week.

Nearly 700 people took part in the Green summit on 21st March in the Manchester Central conference building. It was hosted by The Mayor of Greater Manchester, Andy Burnham and Cllr Alex Ganotis. Alex has the lead role for environmental issues across the combined authority.

Before the Summit, there was a creative use of an on-line survey and a series of 47 listening events, where the ideas of citizens across the 10 local authorities were collected. These were then fed into the summit with breakout sessions where the participants could add more ideas and comments. Andy Burnham called this a new way of opening up proposed changes to enhance the democratic process. After speakers and extensive idea exchange for two hours at lunch time, the discussion moved on to ideas for action and to individual and organisational pledges.

The key note talks set the stage. The first was from Scientist Kevin Anderson from the Tyndall Centre at the University of Manchester. He pointed to the damage that has already been done to our atmosphere and the need to drive down carbon emissions as soon as possible, using low carbon energy supplies.

We have been adding to the Greenhouse gases in the atmosphere since the Industrial revolution, which began in Manchester. Despite progress in reducing our carbon emissions, we still use too many fossil fuels including through the gas to heat our buildings and fuel for transport. Only 20% of the energy we need comes from electricity, it is in housing and transport where the largest cut to carbon emissions must be made. He made several very clear recommendations:

He challenged us all to work FAST on as many ways of achieving carbon reduction as possible and try to meet the Paris Agreement of keeping global temperatures at 1.5 degrees Celsius. After 28 years of scientific evidence there still seems to be very little concerted effort across states to make this happen, and little change in the levels of carbon pollution in the atmosphere, despite the recession, so we need to look creatively at Carbon Budgeting.

Cllr Ganotis reiterated this, explaining the choices we must make to drastically reduce our carbon and the important role cities must play in the fight against climate change. He felt that cities could work together to share innovations and adopt the greenhouse gas protocols. He thought we could consider going for solar power and biomass, better buses and cars and reduce the heat demand in our homes through good insulation. He was delighted that Greater Manchester has been chosen as the UK Pioneer City by the Department of Environment, Food and Rural Affairs. Councils could show leadership, help with planning and finance, but acknowledged that they need their citizens to be on side with this and that it will take more discussion and commitment. We were asked to pledge the small steps we could take to start making this happen. We all need to contribute to mitigating climate change, and to retrieving good air and water quality.

We were joined by video link to the Minister of State, Rt Hon Claire Perry, whose Department in Westminster had paid for the on-line Survey. This had resulted in 2274 responses and 19,505 comments which were still being analysed. She said she too wants to hear from us all about solutions, and announced funding for a Housing Deal designed to clean up contaminated land:  https://www.gov.uk/government/publications/greater-manchester-housing-package. This will inject £68.25 million into incentives to build on cleaned up brownfield sites across Greater Manchester. She wants to see much of this dedicated to Social Housing, which is another priority for the Mayor.

The Chair of The Environment Agency, Emma Howard Boyd, whose civil servants had assisted with the communications for the Summit, warned about the increased incidence of flooding and the need to be more informed about how to deal with heavy rainfall by using our front gardens and green spaces, rather than pave them over as car parks or impermeable playgrounds. Our national Climate Risk was now seen as a bad investment by Insurance Companies and was beginning to result in Credit Downgrades. She encouraged us all to work to value and protect our green spaces as part of our “Natural capital” and to explain this to businesses as part of their investment in dealing with the damage being done by severe weather events. She challenged illegal dumping of waste as an Environmental Crime which would be punished by fines and imprisonment. She reminded us of the Attenborough Blue Planet documentary before Christmas and the dangers of plastic pollution in our rivers and oceans. Plastic waste has become an even more critical issue since China has refused to take any more of our plastic waste, so we need to think of alternatives.

Finally Mike Barry, the Sustainable Business Manager from Marks and Spencer, said he accepted Kevin Anderson’s challenges and was taking steps to anticipate the impact of climate disasters like the recent high temperatures in the Arctic, where whole food supply chains have been disrupted. He was aware of the damage done to biodiversity and the dangers of soil loss. Rotting food waste produces 1/3 of the Methane gas emitted by wasteful societies. He thought we could do something about this if we work on portion sizes and unnecessary food packaging on food-on-the-move. He was working towards only re-usable plastics in their stores, but pointed out the difficulties faced by a national company who have to deal with individual waste schemes in each local authority which do not match any national standard of what is done to recycle or reuse different kinds of plastics. Like property developer, Gary Neville later in the Summit, he called for national legislation to govern the production, collection and disposable products like plastic which can harm nature, especially in our waterways and seas. Neville asked for national regulation on planning high standards for insulation and sustainable building design. The Chair of the Environment Agency agreed and did not challenge the proposal from Cllr Ganotis that we should work towards a Greater Manchester Energy Company supplied only by renewable energy such as wind and solar. He promised a Smart Energy Plan by September.

Alice Webb, the Director of BBC North West was very clear about the contribution which could be made by people working in media companies. Her whole workforce had taken classes in carbon Literacy, were getting used to meat-free Mondays, never have plastic cups on the premises and have championed the Albert Kite mark on goods which shows that they are certified as having been sustainably produced with little or no negative impact on nature. They pledge to buy only renewable energy and to reduce waste to landfill and their consumption of water. They are conscious of being role models.

Finally we were introduced to the complexity of water management in the North West where conservation and transport of drinking water is the responsibility of United Utilities. Steve Mogford explained the new dangers from flash floods and the importance of keeping wetlands and wild vegetation to absorb carbon, sustain wildlife and keep the excess water away from roads and built up areas. He warned against paving over private grounds and showed the wisdom of Slowing the Flow. Everyone needs to contribute, he said. Plant trees and look after our soil, make the most of solar energy, even float panels on reservoirs! He pledged to make sure his staff all refill drinking water bottles and reuse them rather than throw away single use plastic bottles.

Cllr Ganotis began to discuss a Charter, based on the ideas from the whole Summit process. It would include the reduction of greenhouse gases from Transport, by using the Mayor’s powers to re-regulate the buses, make sure they integrated well with other forms of public transport with the same ticketing system. He talked about the additional funding for better cycling paths, safer walking as a different form of active travel, which will improve health as the air quality also improves. Andy Burnham promised a follow up Summit later in the year, when all the ideas from the whole Summit process have been analysed and sponsors found for the more expensive projects. But both he and all the other speakers confirmed that it is up to all the citizens of Greater Manchester to find small ways to make changes to our damaging carbon polluting ways of living, and think about those who do not have such choices. There was a feeling across the Summit participants that we should be ambitious and set our sights on reducing carbon radically, as soon as possible, and try to achieve Zero Carbon by 2040 or earlier.