Read John McDonnell MP, Shadow Chancellor of the Exchequer’s comments on climate change, the environment, and how a Labour government would radically transform the economy  to tackle ‘our single greatest challenge’. 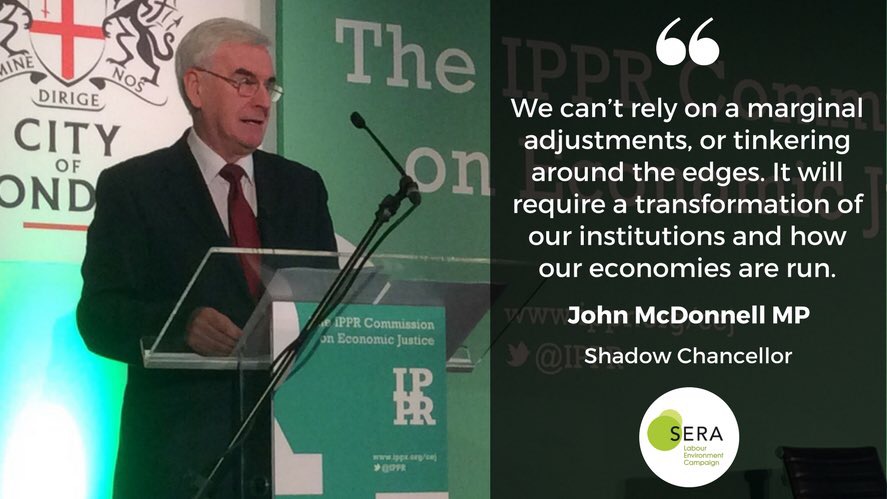 On climate change and the environment:

The failings of this economy – and economies across the world, after decades of neoliberal policy - stem directly from an approach to economics and economic policy that fixates on short-term returns, and misses the long-term damage.

I believe that approach is now exhausted whatever potential it once had. The countries and governments that cling to it, like this one, are tired and incapable of setting a new direction. They cannot hope to meet the challenges of the next century

It is the challenge of reconciling the extraordinary potential riches of our economy, and all of our people, with the constraints imposed on us by the planet we share. The United Nations Framework Convention on Climate Change conference continues this week in Bonn. We all welcome the international effort to reign in global carbon emissions.

International action is urgently needed, and Labour is completely committed to work with others to meet this country’s obligations. The expert consensus on climate change and our impact on the environment is absolutely clear. Unlike our current Environment Secretary we take these international obligations seriously.

This is an Environment Secretary who tried to remove climate change from the school curriculum when he was Education Secretary. An Environment Secretary who is notoriously suspicious of experts, and who has been part of a government that has overseen fracking across our communities, including in National Parks, and now illegal levels of air pollution that have escalated into what a Select Committee has called a ‘public health emergency’.

Labour are calling for the entire body of environmental EU law and treaty principles to be transferred to UK law. But the truth is that meeting these fundamental obligations will be a challenge. We can’t rely on marginal adjustments, or tinkering around the edges. It will require a transformation of our institutions and how our economies are run.

At the most abstract, the problem we face can be stated very simply. Every 1% added to global GDP over the last century has meant, on average, adding 0.5% to carbon dioxide emissions. As the size of the world economy has grown, so too has the pressure it places on our ecosystems.

The consequences of that pressure are now becoming all too apparent. 2017 is likely to be in the top three of the warmest years on record. The other two are 2016 and 2015.

This isn’t only about climate change: other fundamental natural systems are at risk. One-third of the world’s soil has already been degraded. In the UK, the Committee on Climate Change estimate that 84% of our topsoil has been lost since 1850. At this rate of decay, the United Nations Food and Agriculture Organisation estimates that globe has only 60 years of farming left.

What biologists call the “sixth mass extinction event” in the Earth’s history is underway. Half the world’s species of wild animals have been lost in the last forty years.

And this pressure is growing rapidly. Of the total volume of carbon dioxide and methane emitted since 1751, half has been emitted since 1984. The impact of humanity on planet, accelerating since 1950, is now so pronounced that it is claimed we have entered a new geological age of the Earth, the Anthropocene.

Rapidly rising concentrations of carbon and other greenhouse gases in the atmosphere, deforestation and other habitat loss, and mass extinction are combining to put an end to the relatively mild climatic conditions humanity has spent most of its existence under.

Planetary change requires more than small-scale, marginal adjustments. It requires concerted, public action on a scale that meets the challenge.

As the IPPR's Commission on Economic Justice have argued, market-led approaches like carbon trading have failed to deliver. What we need instead is to take a radically different approach - repurposing old institutions, building new.

On Labour’s proposals for the Office of Budget Responsibility:

Over the last few years the Office for Budget Responsibility has established itself as an independent, authoritative voice on economic analysis. The next Labour government will guarantee and reinforce that independence by making the OBR report not to the Treasury but to Parliament.

We want thorough and genuine oversight of our own fiscal plans.We want the public, whether businesses or voters, to be absolutely confident that the public finances are properly scrutinised and managed. But more than this, we want to make sure our plans reflect our values.

We want a moral purpose to be brought into the centre of economic policy making We want to ensure that the overwhelming challenge of climate change is addressed from the very centre of government.

The next Labour government will therefore ask the OBR to include the impact of climate change and environmental damage in its long-term forecasts.

The Bank of England has already begun stress testing financial institutions for the ability to cope with climate change.
We need to take the same far-sighted view of the public finances. The public deserve to know what impacts we might expect on the national purse from the degradation of our environment.Sound, responsible economic management should already be accounting for this.

We'll make sure the OBR has the resources needed to produce the best available modelling of the economic impacts of the environment. And we will make sure not just the next Labour government, but future governments, will be absolutely committed to addressing our greatest single challenge.