On Saturday 10 March a new Trade Union conference took place 'Planning for a Future which doesn't cost the Earth' organised by the Campaign against Climate Change Trade Union Group. Graham Petersen of the Greener Jobs Alliance reports back on a successful event. 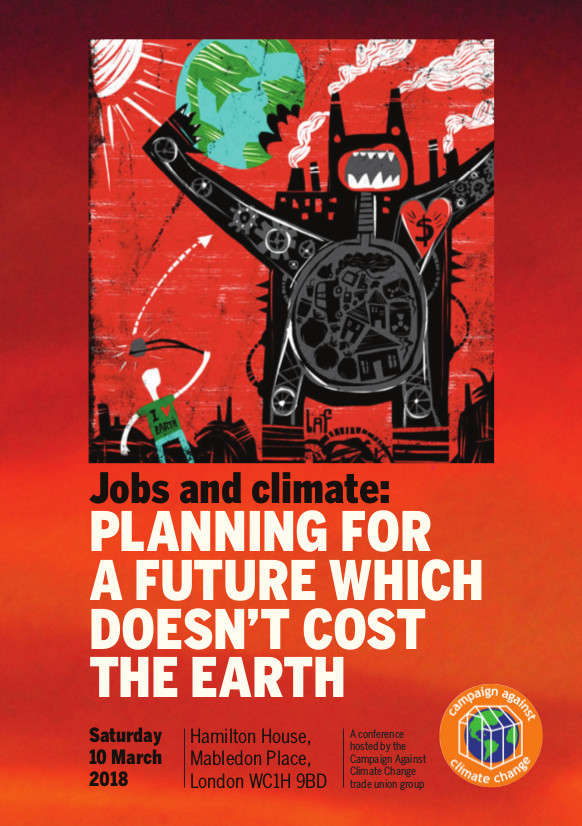 The Campaign against Climate Change conference held on 10 March was a huge success. Over 200 people attended the event at the National Education Union Head Office. The theme of the opening session was ‘Jobs versus the environment: challenging a false choice’. Professor Joanna Haigh, a leading scientist at the Grantham Institute, outlined the urgency of action now to get to zero carbon by 2050. Sarah Woolley, whose union, the Bakers Food and Allied Workers Union, moved the climate change motion at the TUC, spoke about the need for unions to prioritise this issue. The BFAWU are calling on their health and safety reps to take this
up and are producing a Newsletter to support this role. Asad Rehman from War on Want, spoke about the importance of seeing this as more than just an environmental issue, and the need for a vision of the future that challenged a system that has caused the
problem.

Barry Gardiner, Labour Party Shadow Secretary for Trade and Climate Change, concluded the morning proceedings. He emphasised that action should not be just a top down approach. Communities engaged in the fight against fracking illustrated this and gave a pledge that one of his first priorities in any incoming Labour Government would be to introduce a ban on shale gas extraction.
Ten workshops were held either side of the lunch break. The Greener Jobs Alliance hosted one on ‘Just Transition: Challenging the Green Growth Strategies’. We gave an overview of industrial strategy and the failure to reflect the obligations of the Paris Agreement and the Sustainable Development Goals. The discussion identified ways in which union engagement from local to international level could be embedded.

The final plenary heard from Suzanne Jeffery, CACC, Mika Minio-Paluello, Platform, and Liz Hutchins, Friends
of the Earth, who highlighted the inequalities of the current system and the need for public control of energy
systems. It concluded with Chris Baugh, PCS, giving a rallying cry for the trade union movement and local
communities to campaign to put social justice and decent jobs at the top of the political agenda.