Alan Whitehead, Shadow Energy & Climate Change Minister and Labour MP for Southampton Test writes for SERA arguing the Government response to the plastic problem has been completely inadequate despite pressure from the public to act. He explains the current problems with the UK's recycling system and the pressing need for action. This article was originally published in the Summer 2018 edition of SERA's New Ground Magazine. 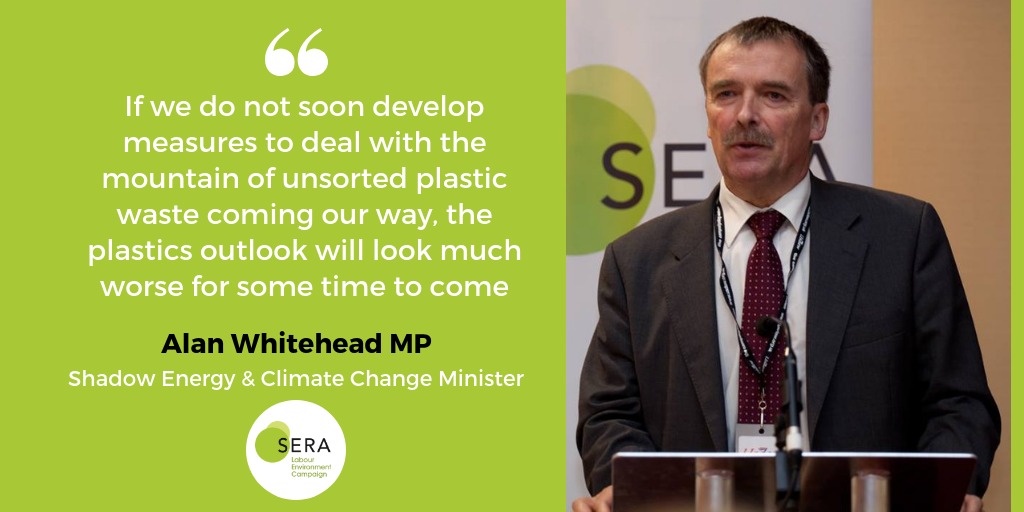 At last, it seems the nation has got plastics. It may have taken a documentary by a national treasure to shift the nation in the general direction of ‘plastics are not such a good thing as people thought and something ought to be done about it’ but that is where we are now, and clearly there is a sudden and not very coherent pressure on government to do something about it.

Government response has been equally incoherent. Theresa May has committed the country to eliminate all ‘avoidable’ plastic waste by 2042, (or by 2050 if you read Michael Gove’s 25 year Environment plan) there will be ‘consultations’ on a possible deposit return scheme for plastic bottles, a vague treasury suggestion that disposable coffee cups and food packaging could face a levy, a possible consultation on banning plastic straws, drinks stirrers and plastic stemmed cotton buds. Some words essentially designed to suggest that action is under way, but very little actual action, as has already been reflected upon by the House of Commons environmental audit committee which has forensically taken apart the distance between the warm words and anything emerging from them and has already taken government to task for foot dragging after the press releases had started to go cold.

This, though is now it seems how ‘plastics’ are going to be dealt with in the public realm. Take an important but essentially peripheral element of the plastics stream, announce an enquiry or a very general proposal to deal with it and then kick it into the long grass. Granted, some specific actions are being taken, such as the ban on plastic bags, but that particular measure has, a long history of being campaigned upon well before the present broader issue really came to public attention.

The reality of ‘dealing with plastics’ however is far more complex and challenging than the immediate raft of ‘consultations’ suggest. To start with it is not just about ‘single use plastics’ which somehow can be reduced or eliminated: over 70% of plastic waste overall arises from plastic packaging, which is not going to be significantly reduced or replaced in the very near future, but continues to mount each year with all the consequences of placing yet more virgin plastic into the environment without clear lines of approach about how it can either be recycled reused or minimized.

It is instructive to consider briefly how this mountain of plastic waste has been managed over the last decade or so. While plastic waste collection has improved over that period so that for example 58% of used plastic bottles and 32% of tubs and trays are now collected one way or another, (which still means vast quantities of bottles, throwaway items and packaging simply enter the waste stream mostly to end up land lled or incinerated) very little is then done with the material that is actually collected. Correction: something is done with what is collected but it does not t the description of ‘reuse or recycling’ very accurately, unless you believe that putting a jumble of low grade plastic waste in containers and shipping it halfway across the world really counts in that context.

For that is what the country has mostly been doing with plastic waste that is collected: essentially putting much of the plastic however collected into low grade mixed plastic lled containers and shipping them mostly to China. Almost 60% of plastic waste over the last decade has been exported in this way, which means that only a proportion of a proportion is actually processed in any way in the UK. This was for a while a mutually beneficial relationship: China needed basic plastic for its rapidly expending consumer services, and for the UK a useful ‘safety valve was in place meaning that little effort after collection, had to be put into the fairly expensive business of actually recycling the stuff collected.

But now China has had enough. Literally. After announcing its ‘Green Wall’ policy in 2012 (to which no notice was taken and exports continued unabated) China has now stopped all mixed waste plastic imports as of the beginning of 2018. This means that vast quantities of mixed grade plastic have no market anymore and will have to be dealt with somehow within the UK, assuming substitute markets in South East Asia are not secured. In practice, just as moves are under way to start to deal with at least some of the more egregious misuses of plastics, a whole new mountain of collected but plastic will appear in the waste economy, probably to be dealt with by incineration at best, and further landfill at worst.

The relatively easy route of export over the last decade has not only meant that serious plastic recycling facilities have been slow to develop, but the very basis upon which plastic can be presented to such facilities has lagged in development. Plastic film, for example is collected by only 19% of local authorities, and yet over 700,000 tonnes arise each year, with very few facilities established to reprocess it even once collected.

But even if we were able to collect most plastic efficiently, and then recycle it so that material was available for remaking plastic products, there is still a gap between that position and the reality of serious amounts of recycled content being incorporated into new products. At present, not much recycled material finds its way into equivalent products – it is estimated that only about 3% of plastic lm goes into making new plastic lm or similar products – all the rest comes from virgin plastic sucked into the system, Most collected lm goes (or went) to China, and is now being released back onto the UK market that contains very little in the way of plant that can effectively recycle lm, let alone reuse the captured lm in new products.

Ten years ago I worked on and presented a ten minute rule Bill to parliament ‘’the Recycled content Obligation Bill’ which would have given government power to specify a level of recycled content for particular products. That would have, in my opinion started to resolve the ‘pull through’

problem of much recycling – investment in producing a recycled ‘product’ not taking place because investors say that there is no market for the product – recyclers finding that there are no processing plants for whatever is recycled : a dampening effect on recycling efforts – and in this instance recycling to preserve the integrity of different product quality: result - a recycling outcome low in the waste hierarchy and more virgin plastic coming into the system.

All this leads to some fairly stark conclusions about our present plastics landscape. If we do not soon develop measures to deal with the mountain of unsorted plastic waste coming our way, the plastics outlook will look much worse for some time to come. We will certainly make no progress with the goal of making the plastics economy as circular as we can, so that efforts to remove single use plastics from the stream are backed up by measures that limit virgin plastic coming into the stream and adding to the pile of problems down the road.

And that is, I think, the metric we ought to apply to the big question of whether the warm words uttered by the Government on plastics over the past few months have any long term substance: will there be measures to deal with collection of plastic which hands it to recyclers in a useful state? – we might at the very least require all plastic to be consistently collected by type in all parts of the country. Will there be any legislation that specifies how manufacturers should approach the issue of using what has been recycled in new products? Will there be any plan or schemes that enable the industry rapidly to develop effective plant for recycling plastic to a high standard? We provide underwriting for the development of renewable energy: why not do so for the development of renewable plastic?

There is a new waste strategy expected later this year from the Department of Environment. To date the consultation on it has not included any of the elements mentioned here that might apply to plastics. Unless consultations on bright ideas such as a return deposit on plastic bottles are not followed up by action on methods to follow through on what might be a much greater supply of recyclable bottles into the system, then such plans will have little long term effect on the big end issue on circularity in the plastics economy. Right now the signs that Government has understood this or is taking the initial ideas on plastic use and reuse, are few and far between.