Labour, tens years on from the Climate Change Act

Bryn Kewley is advisor to Labour's Minister for Energy & Climate Change. He is a member of the SERA executive and tweets at @BrynKewley This article was originally printed in SERA's magazine New Ground, exclusive to SERA members. 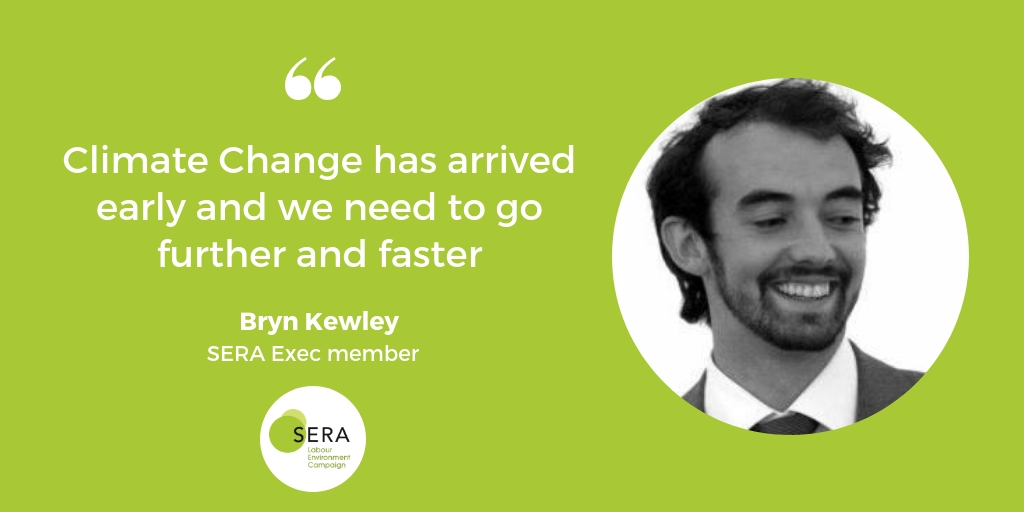 The meeting was in Exxon’s headquarters. James Black from their Engineering and Research division was set to present top company executives with some disturbing findings. Fossil fuel emissions were changing the global climate and ‘present thinking holds that man has a time window of five to ten years before the need for hard decisions regarding changes in energy strategies might become critical.’ The year was 1977.

Yet it took many more years, scores of international summits, thousands of pages of scientific documents and a mass movement of campaigners, enlightened businesses and MPs to encourage the UK government into legislative action.

In response to expectations in 2006 that the government was going to miss its climate change targets and with no clear fall in emissions since the mid-1990s, many NGOs were encouraging climate legislation. One of them was the ‘Big Ask’ campaign. Run by Friends of the Earth under Tony Juniper part of the ‘ask’ was annual targets with three per cent reductions in emissions year on year.

That year Labour MP Michael Meacher subsequently published an original Climate Change Bill calling for this three per cent annual reduction every year till 2050. An Early Day Motion was tabled that supported the Bill, agreeing with the Government’s Chief Scientific Advisor that climate change was a threat to civilisation. It was signed by 412 MPs from across the House.

The draft Climate Change Bill was published in March 2007 with the accompanying press release stating that we could no longer ‘close our eyes and cross our fingers’. However the government pushed back on the annual targets which it felt didn’t provide enough flexibility, opting instead for five yearly budgets.

Further changes were recommended in the summer of 2007 by a Joint Committee of both Houses which examined the bill. They warmly welcomed the leadership being taken by the government, and agreed with the five yearly carbon budgets, but took umbrage at the lack of inclusion of emissions from international aviation and had significant concerns about the enforceability of the budgets.

By November the Bill was ready to be tabled, initially in the Lords, under a new Labour Prime Minister. Gordon Brown gave a speech at the time, thanking contributors and stating that “evidence now suggests that as part of an international agreement developed countries may have to reduce their emissions by up to 80%. So we will put this evidence to the Committee on Climate Change, ask it to advise us as it considers the first three five year budgets on whether our own domestic target should be tightened up to 80%.”

It was slow progress, but methodical. The Bill was heavily amended by both the opposition and the government during its passage – finally reaching Royal Assent on the 26th November 2008, over a year after being introduced. The final Act carried the 80% emissions reduction target considered broadly consistent with having a 50/50 chance of keeping to 2°C of warming.

Ten years on, and through the Great Recession, the Climate Change Act and its Committee have stood the test of time. Despite a lack of enforcement we have, in a very British way, carried on with what is necessary to do our bit.

The Act has been surprisingly resilient to attacks from the final few superannuated climate sceptics like my very own MP Christopher ‘chopper’ Chope (who recently made headlines for opposing the upskirting ban). Having been one of only five MPs to vote against the passing of the Climate Change Act he has gone on to support private members bills which among a list of proclaimed ‘true-blue’ proposals, attempted in 2014 to dissolve the Department for Energy and Climate Change.

Whilst some of the Act’s strength resides in its resilience this flexibility has come at a cost. Almost all of the UK’s emissions reductions have come from the coal/renewables switch in the energy sector, with few contributions from other major emitting areas.

The rise of renewable energy has seen an extraordinary acceleration outstrip the predictions of even the most bullish NGOs. At the start of this decade Britain had seven times more generating capacity from oil, gas and fossil fuels than from renewable energy. RenewableUK reported that it took 19 years for the UK to build its first 5GW of wind capacity. Now we can build the same amount of wind in 2 years. We’re connecting 3.8GW of solar, onshore and offshore wind and biomass each year. Only this quarter we tipped the balance and now have more installed renewable capacity than fossil fuels. Throughout this transition the cost of building renewables has fallen precipitously.

Good news. And yet the Arctic Circle was on fire this summer. Climate change has arrived early and we need to go further and faster. This is why Labour’s pledge to build 60% of our power and heat from low carbon and renewable sources by 2030 is so important. Labour would ban fracking and get building the technologies of tomorrow. Despite the progress the energy battle is far from won with trends of variable generation, decentralisation, democratisation, digitalisation, keeping the lights on and the bills down all still able to scupper progress.

Managing the continued acceleration in energy requires close scrutiny, especially with its increasing interconnectedness with other key sectors which are still heavily emitting and need to be decarbonised, principally heat and transport. Unlike building renewables which is a remote change, the challenges involved with heat and transport like insulating homes, changing boilers and what car you buy, are very personal decisions needing different solutions.

The long view on heat looks something like energy efficiency first, followed by hybrid heat pumps which aren’t disruptive to install, run on electricity 80% of the time and otherwise run on a mixture of green gases and hydrogen from electrolysis cracked from water at times of cheap electricity availability.

Transport will become heavily electrified faster than most predict. Many in the energy sector are relaxed about how much more electricity this will require, approximately 16%, but significant amounts of charging infrastructure and grid upgrades are needed to ensure we don’t melt the wires. All these issues are interrelated and the answers won’t be found in a silo.

And there are many more big policy questions to struggle with. To date the majority of negative emissions are expected to come from biomass energy with CCS – yet currently this technology is creating significant emissions. Any animal with two stomachs, principally cows and sheep, and the supply chains that support them are significant entrenched emitters. The aviation sector continues to grow with a tiny minority of society taking the lion’s share of heavily emitting long haul flights. Crashing out of the EU carries substantial risks for UK climate action, one often ignored are the efficiency targets which have driven white goods such as washing machines to use much less energy, reducing emissions and cutting bills.

The Climate Change Act has got us on a path of progress but there is a lot to be done, starting with that target of 80% emissions reductions by 2050. After the Paris Climate Summit heard from vulnerable nations like the Marshall Islands which will cease to exist if the sea rises with 2°C, the world agreed to aim for 1.5°C. The recent IPCC report highlighted that this will save millions from water scarcity, food pressures and keep us away from dangerously risky tipping points such as melting permafrost releasing methane.

This is why Labour announced that it wanted a net-zero emissions target. Effectively this means changing that 80% target to 100%, with the caveat that if we struggle to abate all emissions from one sector, the shortfall must be made up with negative emissions in another. As with the target change in 2008, also based on evolving science and international consensus, the Committee on Climate Change have been asked to look at the evidence and provide advice. Considering that climate change impacts are increasingly being felt today, it’ll be important that they come back with strong suggestions.

Crucially, we’re not doomed. Progress is accelerating. 41 years on from James Black’s prediction to Exxon, despite a recession, Brexit and Trump, and notwithstanding a shift in the international post-war liberal order, it feels for the first time that if, and only if, we keep our foot firmly on the accelerator and our eyes on the road ahead we might just make it through this together.