Why Scottish Labour are fighting for warm homes

Pauline McNeill MSP on why energy efficiency must be a priority for tackling both social and environmental justice. 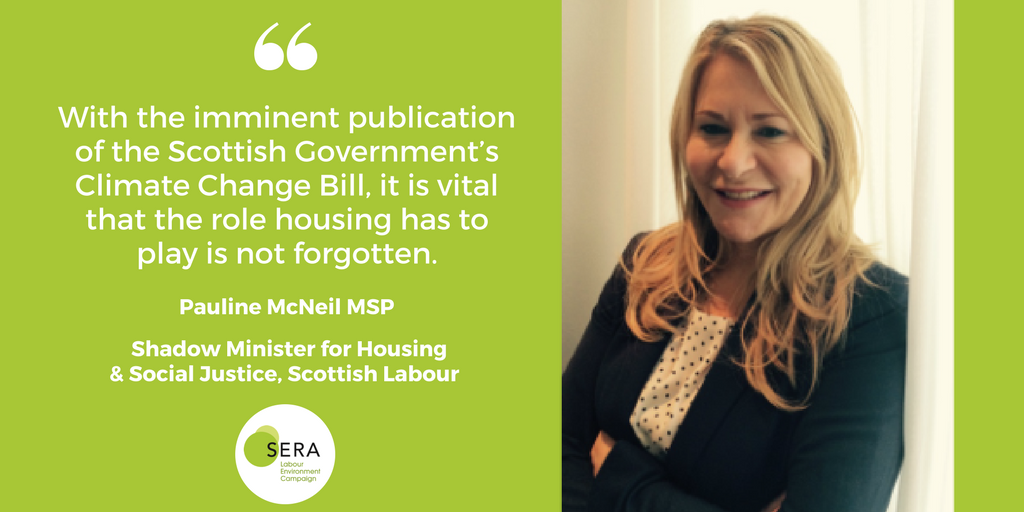 Poverty and inequality are growing in the UK, and a key driver of poverty is an increasing number of people’s inability to access a warm home. Ensuring that all properties in the private-rented sector have an Energy Performance Certificate (EPC) rating of C is an extremely important step towards improving this situation. Fundamentally, cold homes waste energy and harm their occupants.With the imminent publication of the Scottish Government’s Climate Change Bill, it is important that the role housing has to play is not forgotten.

Private renters and young people are being disproportionately hit by Scotland’s housing crisis. This week, Shelter reported that almost half of those seeking help from the charity were private renters, and almost half of those requesting advice were young people aged between 16 and 34. Top of the list of problems people come to the charity with is struggling to afford or pay housing costs. Clearly part of these costs are fuel bills, and with fuel prices rising, for many, this struggle looks set to continue.

Growth in the private-rented sector has been driven by tighter lending terms since the financial crash of 2008, rising house prices, stagnating wages, and the requirement to put up larger deposits to secure a mortgage. The number of people who live in the private­-rented sector has doubled over the past ten years. This has led to a new group of people who have been dubbed “Generation Rent”. Added to this, Fuel poverty in the private-rented sector is 33% - higher than the national average. With the recent decision by British Gas to raise its charges by a massive 12.5% from next month (despite the fact that wholesale energy prices have decreased since 2013) means that without specific action, an end to people living in fuel poverty looks even more like a distant dream.

There are many reasons why reducing fuel poverty should be a pressing concern for any government. Cold, drafty homes which are hard to heat not only help to increase energy emissions, but they pose a health risk to their occupants – which is why the National Institute for Clinical Excellence (NICE) also recommend that homes should be at EPC rating C or above. Research indicates that living in a cold home is associated with poor infant weigh gain, more frequent and sever asthmatic symptoms, and increased depression and anxiety. Fuel poverty due to poor housing causes avoidable health inequality and is inescapably unjust.

In order to give Scotland a meaningful chance at reducing fuel poverty, passing ambitious legislation to compel private landlords to improve the energy efficiency of their properties is absolutely vital. While it is commendable that the Scottish Government are suggesting that private landlords get their properties up to an Energy Performance Certificate (EPC) rating D by 2025, we need to be more ambitious and insist on a C rating by 2025. This will also make a much needed contribution to the Scottish Government’s commitment to reduce carbon dioxide ‘greenhouse’ emissions by 80% between 1990 and 2050. Emissions from the residential sector represented 12.7% of total direct emissions in 2015, up from the previous year. It is essential that the new Climate Change Bill contains commitment to get all homes up to an EPC rating of C or above.

Legislation on minimum energy efficiency standards has already been passed covering social housing and levels of fuel poverty has subsequently fallen for those living this sector. It is time to do the same for the growing number of people living in private-rented accommodation.

We will work with the Government on achieving warm homes  - but we will force them to be far more ambitious.

Pauline McNeill is Scottish Labour's Shadow Minister for Housing and Social Justice. She tweets at @pauline4glasgow