What can be achieved locally? The Manchester Climate Change response

Lydia Meryll is a SERA executive member, community activist and environmental educator. She leads Manchester SERA. She tweets at @lydia_meryll

This article was originally published in SERA's magazine New Ground 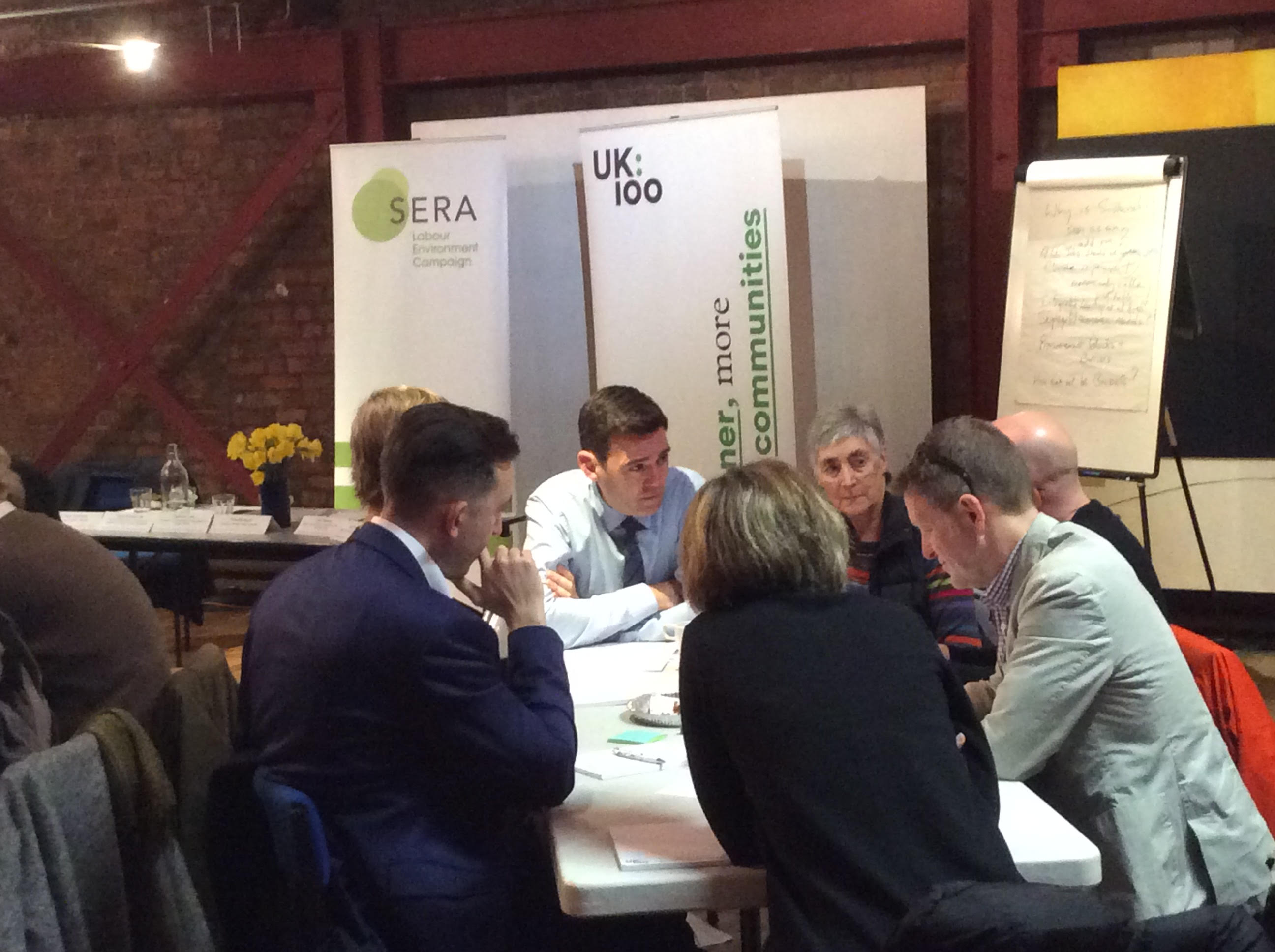 In 2009 SERA joined a group of environmental activists to lobby Manchester City Council on their lack of practical action on Climate Change. The Agenda 21 discussions had been aspirational but lacked citizen engagement. NGO activists and local environmental businesses contributed to the complex ideas for City-wide change. At that stage, the science was not clear about local metrics for carbon reduction. One SERA member had attended an IPCC meeting in Geneva and reported back on the massive scope and independent reliability of this world-wide scientific community. Together we designed a plan of action and called it “Manchester a Certain Future”.!

Meetings took place in the Town Hall. The Leader of the Council attended every meeting, arriving on his bike. He still does. We worked in Theme Groups, chased up promises and stressed the urgency of each measure. The Council was already facing huge cuts from central government and sot became increasingly difficult to service these meetings.The role of the NGO sector became essential. Manchester Climate Change Agency became an ALMO, housed in a local eco architect’s office. Partnerships became increasingly important. The Council updated its plans at yearly assemblies.

From this citizens’ initiative grew the Carbon Literacy project, a comprehensive way of training leaders and staff in a whole range of organisations. The project, now run by Cooler, grew to work beyond the City to all the 10 Greater Manchester Boroughs. One of Cooler’s aims was to get carbon reduction messages out to ordinary members of the public. They held ‘carbon classrooms’ in shopping centres, led by university students and by children. These young people aged between 8 and 14 came from local Eco Schools, devising games so that adults could ask questions and learn. This has grown into the extensive intergenerational learning project now run in other public spaces by the NGO, Manchester Environmental Education Network www.meen.org.uk

In 2012 growing the local economy remained a Council priority. Ease of transport was seen as essential. Air quality wasn’t good, but we were not aware of the extent of the toxins or the relationships between nitrous oxide, particulates and asthma. We certainly didn’t equate the air pollution with excess carbon into the atmosphere. We had not yet started to experience the floods or seen the heathlands burst into summer fires. There was a massive amount of public education to be done. We had not even dreamed of Brexit!

In 2015 SERA Manchester members and other FoE activists rode into Paris for the Conference of the Peoples COP 21. We met thousands of other activists from all over the world in social gatherings and demonstrations around the Eiffel Tour and the Champs Elysee. A month later, in Jan 2016, after the Paris Agreement was signed, Manchester committed to become a ZERO Carbon City before 2050.

It all felt heroic. But it was far from public knowledge. We were a small band of mostly white middle class activists who lived in a bubble. Then Michael Gove MP, then Secretary of State for Education, shrank the Secondary Curriculum, editing climate change except from all but Geography, a specialist choice of study, and fragmented across Science curricula. Primary Eco Clubs were being cut for lack of funding. In 2009 Labour had funded a Sustainable Schools strategy and introduced a national Inspection criterion for Sustainability across the whole school. This was scrapped (except in Scotland, where it still flourishes) We now lacked any public education strategy.

Adult Education, including Unionlearn, was shrunk to a minimum. Many later trained in carbon literacy. Trades Unions such as Unison, UCU, FBU and The Bakers and Allied Food Workers Union were keen, but had access only to on-line materials. Now Universities came forward through the Environmental Association of Universities and Colleges (EAUC), the Greener Jobs Alliance and the National Union of Students. Prof Kevin Anderson from the Tyndall Centre, University of Manchester, took the message of the Carbon crisis to local Councillors and public forums.

In 2016 we discovered we had a new City Region structure and elections for Greater Manchester Mayor. ManchesterSERA hosted a Green Gathering inviting candidates to meet environmental activists from the proposed expanded Greater Manchester Constituency. Andy Burnham came to that meeting. There were passionate and very well informed contributions, round tables and discussions. When he won that election, he appointed an experienced civil servant to lead on green Issues and called up help from the partners who had met him at that event. He also called upon the Tyndall Centre’s expert advice. We all contributed to his first Green Summit in March 2018. SERA was invited on to the Steering Group to support change through the Labour Movement, Trades Unions and through CLP Environmental Officers and Ward and Constituency mechanisms. Green Summit Two took place in March 2019.

Some sceptical local politicians associate environmental intervention as something to do with the Green Party. The complex science of Carbon Budgets has to be connected to other more immediate issues, single use plastic waste, air quality outside schools. These are rightly presented as health issues which require immediate action. Indeed the UK Government has been fined by the EU for failing to act on shocking air pollution. Cities will produce plans by December. However these are proxy issues when it comes to Climate Change!

In 2018 Cllr Angeliki Stogia, Manchester City Council Executive Member for Environment Planning and Transport, faces this challenge head on. Her policy paper “Playing our Full Part: How Manchester’s residents and businesses can benefit from ambitious action on Climate Change.” The aim: to become Carbon neutral by 2038. She convinced Councillors to adopt a plan to change the city’s behaviour in relation to food waste, energy efficiency, transport, and new green investment strategies. “This goes right at the heart of what we are in politics for: to improve social equality, to promote social justice, to protect those on low incomes, to lift people out of poverty: people that live in disadvantaged areas, and live on lower incomes usually have to bear the brunt of pollution, food and fuel poverty. Our plan has to highlight how it underpins existing Council strategies, it’s not just about how we grow our economy, it is also about how we deliver our social policies.”

However, she accepted that environmental activists use language which excludes a large proportion of the community. What are “fossil fuels, carbon budgets”? Plain language and local relevance was essential. People had already grasped the urgency of the poor air quality and see the impact on the health of older people and children, so that was a good place to start, calling for Clean Air Zones. She pointed out that we had been able to change smoking habits by using health evidence, so it will be possible to show the causes of dirty air. “Dirty air can only be stopped if everybody takes responsibility”. While Manchester City Council and the Combined Authority are looking at the scale of the problem and potential solutions, we all need to play our part. We need to know what support that the government will give; vehicle scrappage; upgrade measures? What is Highways England going to do? We need to show ordinary citizens how we can all breathe cleaner air?

Each Ward will explain how residents can contribute – and why. The overarching aim would be for all future policy decisions to be Climate-proofed. In Wales the Assembly insists all policies have to demonstrate the impact on future generations. Angeliki wants to strengthen local standards for insulation in new build and push for adequate retrofit.

If unions lead on divestment from fossil fuels from the Greater Manchester Pension Fund, alternative investments can be in renewables investments. Whole communities have not been asked yet. They may have practical experience of disaster management: understanding of flood management in Bangladesh, dealing with drought in Kenya… Proactive outreach is needed. SERA has convinced our MP, Afzal Khan, to promote the agenda. He planted a symbolic Tree and committed to buy a hybrid car.

Cllr Angeliki Stogia asked SERA to take a clear role with the Council as a “critical friend” and to offer the elected members support with practical ideas from elsewhere in the UK, through the linked up cities collaborations like UK100. She asked how to join and become a member of SERA.

Affiliate your CLP to SERA and get acting locally