Wetwipes and fatbergs: A real stain on the environment

Debbie Leach, Chief Executive at Thames21 wrote for SERA's magazine New Ground recently on the the huge issue of wet wipes polluting the Thames. Although the new super sewer being built deep under London will help, there is still much politicians and industry could do to clean up the mess 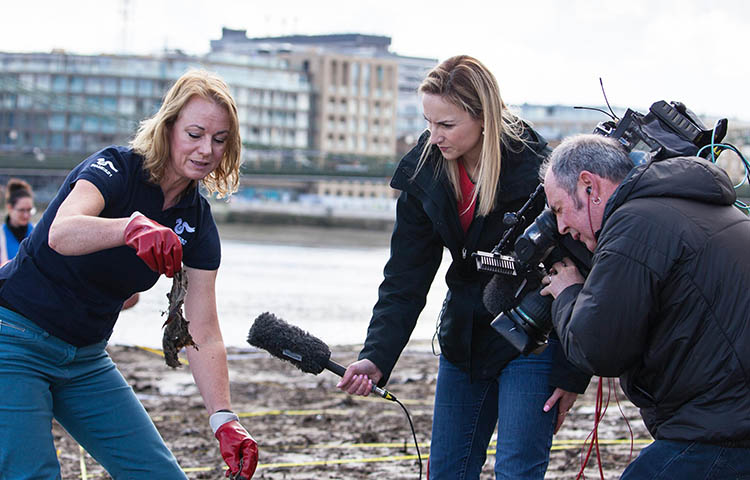 “So where are the wet wipes?” asked the TV reporter, a little testily.  “You’re standing on them” I answered. It was the Thames foreshore at low tide and the cameraman had set up equipment on a low mound.  I bent down, nudged the mound with my (gloved) hand and pulled gently. A long, mud-coloured, fraying length of intertwined dirty rags began to unravel from the river silt in front of their horrified eyes.  It would be an understatement to say that the riverbed is carpeted with wet wipes; rather that the riverbed is constructed from them. This is the dark side of the River Thames; where used and flushed wet wipes have rapidly become an intrinsic element of our natural world.

The Thames is London’s greatest natural asset. It attracts millions of visitors each year and takes centre stage on many international films, including James Bond. This is where we should be showcasing how the UK values and protects its natural environment. The River Thames should be shining a light on Best Practice.  Instead, it highlights an ever-escalating problem; humanity’s reliance on single-use plastic.

Where wet wipes snag on a twig or protuberance on the river bed they gather up others, building in layers into lumpy, unhygienic and disgusting mounds in one of the most famous rivers in the world. This unseen plastic menace is under our very feet at locations where school groups visit, rowers and paddle-boarders glide serenely by, and which are home to juvenile fish nurseries of European importance.  This is not a healthy environment for anyone.

The wet wipe is one of the most rapidly increasing items of single-use plastic that people use.  While it looks rather like a tissue and as harmless as loo paper – they are anything but. We must all be cautious when the packet tells says ‘flushable’. While flushing might appear doable, it is a really bad idea for our environment.

The plastic fibres in wet wipes create a durable item that will never completely disappear.  Some of them will be discharged into the Thames when rainfall causes the sewerage system of central London to overflow into the river - which happens about once a week.  More will be cleared from the screens of sewage treatment plants and taken to be buried in landfill. Even more wet wipes accumulate within our drainage network and eventually make their presence felt in foul and devastating ways.

If wet wipes were humans they would be dubbed ‘extremely sociable’, because once released into the wild via your loo, they mingle. They cling. They attract others. They never leave. And when combined with fat poured down the drains, they create a monster – a Fatberg.

The Fatberg is a misshapen, pallid, solid mass of wet wipes and congealed fat created within the drainage system, from what we pour and flush into it. The Fatberg can grow to colossal proportions, weighing up to 10 or 15 tonnes, before it finally breaks the sewers. It attracts a horrified fascination. This beast growing and lurking in the pipework under the ground causes great damage, distress from the sewage forced up into neighbourhoods, and it is extremely costly to get rid of.

The wet wipes that congregate in the side sewers are more insidious, but just as dangerous. The blockages can result in flooding that devastates homes, pushes sewage into rivers and wreaks havoc on wildlife.

The sheer scale of the wet wipe problem is truly astounding. Every day, thirty-one tonnes of wet wipes are now cleared from the screens at Beckton Sewage Treatment Plant– and that is at just one single treatment plant.

Since 2005, I have been lucky enough to run Thames21, the environmental charity working with communities and partners to ensure that we both protect and benefit from our network of rivers. With our feet quite literally in the river, delivering practical river improvements with thousands of local volunteers, Thames21 experiences first-hand the challenges our rivers face.

Our Thames River Watch programme trains and supports members of the public to survey and monitor the health of the river Thames, collecting data on pollution from single use plastic bottles, to raw sewage overflows. The public are passionate about the river and by examining its depths, its fringes and the detritus it transports, Thames River Watch identifies some of the issues affecting not only the river, but the wider environment.

Increasingly concerned at the volume of wet wipes we were finding in the river, Thames River Watch began specific surveys to document the scale of the problem. Last year our team visited a site at Hammersmith Bridge where transect surveys of the Thames foreshore recorded the highest number of wet wipes ever in a single place: 4500 in a 154sqm area. We returned to the site this year and despite the thousands we removed the year before, Thames21 counted even more with the initial tally more than 5000 wet wipes. Wet wipes are accumulating in mounds with an average density of around 100 wet wipes per square metre. This number is sickening and cannot be allowed to continue.

Thames21 volunteers often use the Jam Jar Shake test to show just how hard it is to get a wet wipe to break down. Simply fill two jam jars with water, put some loo paper in one and a wet wipe in the other, and shake. The loo paper will disintegrate within seconds, but the wet wipe remains robust minutes later. No one needs a single use wipe so strong.

We need to stamp out the notion that single-use items are all the better for a bit of plastic.

We can tell from the raggedy wet wipes embedded in the Thames foreshore that, yes, eventually they do start to break down but only to cause a whole new swathe of problems.  The synthetic polymers they contain are released into rivers and oceans as microplastics, which can be eaten easily by wildlife from tiny organisms to large marine mammals.  In the River Thames, an average of seven out of every ten flounder living in the river have plastic in their stomachs. It is an appalling reality and one we must immediately seek to rectify.

It is our collective responsibility to tackle this.

We need to drive public awareness of the damage wet wipes are causing to our rivers and the wildlife they support. We need to advocate for reusable wipes to be more widely available on the market. At a minimum until reusable wipes are the norm, we must educate people to no longer flush disposables.

Systemic change is also needed. Manufacturers should ensure that their products are clearly and correctly labelled. If it contains any plastic, it is not flushable. There should be clear legal consequences for manufacturers who mislead consumers and fail to educate of best disposable methods via their packaging.

Equally, and perhaps more importantly, industry needs work more quickly on providing plastic-free alternatives. The public appetite for making the switch to reusables is there, but investment in new and sustainable technologies is what’s needed now because the way wet wipes are damaging our rivers is not acceptable. Change is needed at every level, and it is needed now.