Clyde Loakes is the Labour Councillor for Leytonstone Ward and Deputy Leader and Environment portfolio holder for Waltham Forest Council. He tweets @Labourstone. This article was originally published in the Autumn 2020 edition of SERA's flagship magazine, New Ground. 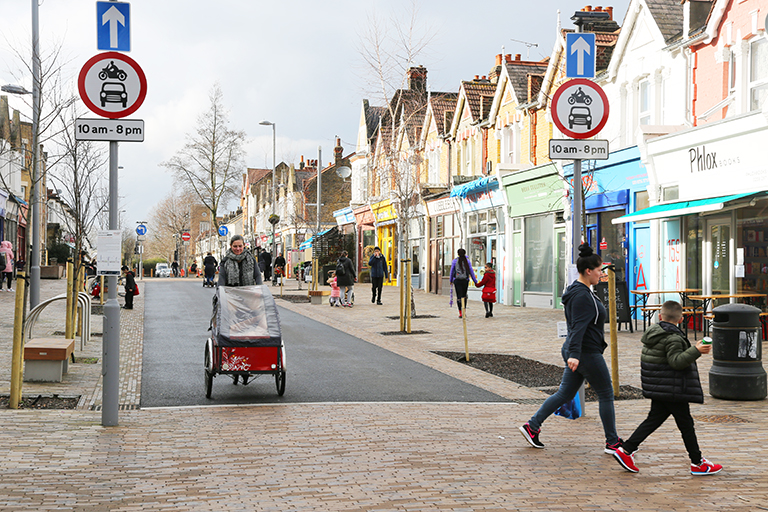 As I write COVID-19 and its lockdown are still dominating our lives. People are walking and cycling more as part of their daily routines - behaviours have changed albeit temporarily. In response councils and campaign groups are talking about temporarily widening pavements and installing temporary cycle tracks. However, why invest time and effort in temporary measures, when we already know such things are needed permanently? I want to offer you a blueprint for ‘permanency’!

The ‘Mini- Holland’ programme was instigated before COVID-19 and whilst Boris Johnson was Mayor of London. It was a £100m Transport for London fund for the 18 outer London boroughs to bid for to help increase levels of walking and cycling, where short based and single occupancy car journeys are prevalent. All 18 bid, with Waltham Forest, Enfield and Kington sharing the fund. Waltham Forest secured £27m.

Key to our bid was the concept of ‘Villages’, now referred to as ‘low traffic neighbourhoods’, as well as some major infrastructure interventions and a substantial and ongoing programme of complementary and behaviour change measures - all working to increase regular levels of walking and cycling, and reduce car use, amongst our residents.

The principles are not new, namely how to stop rat running through local residential streets in their thousands, bypassing traffic management controls on the main roads designed to manage and control such levels of motorised traffic. What was different for us was installing the interventions that ensure the whole neighbourhood benefits, because as we know rat running is like water - it will find a way. Across our ‘Villages’ we have installed 51 ‘Modal Filters’ (the opposition refers to them as road closures) which allow pedestrians, cyclists, cargo bikes and micro-scooters to go through, but prevents those in motor vehicles doing so. Residents in those areas can still access their homes by car too, just not always in the way that they had previously. We’ve more modal filters planned.

Across the ‘Villages’ and further afield we’ve created 31 new Pocket Parks with more planned, which are largely maintained by residents to Britain in Bloom standards! They’re places where more trees have been planted, alongside planting to support our precious pollinators and are mostly created on Sustainable Urban Drainage System principles. We’ve tightened up junctions and introduced over 145 ‘Copenhagen’ or ‘Blended’ Crossings that help reaffirm and reinforce the Highway Code Rule 170 around pedestrian and cyclist priority at these junctions - the entry points to our ‘Villages’ - and we have a huge number more in the pipeline. TfL monitoring of before and after driver behaviour shows a positive response in favour of the active traveller after these crossings have been introduced.

In the ‘Villages’ you can hear the birds sing again! This is one of the more interesting and often repeated pieces of feedback that we receive. It is coupled with a feeling of increasing levels of neighbourhood cohesion, as more people walk their children to school for example, walking with their neighbours and the parents of the children’s friends. The Pocket Parks and ‘Modal Filters’ allow play, conversations and other legitimate interactions to take place - you can now be, literally, ‘stopped in the street’.

All of our ‘Villages’ sit within 20mph Zones and are resident permit parking only - these are the basics of establishing a ‘low traffic neighbourhood’ – removing - or at least reducing - the speeding traffic and the non-local traffic that does not reside in that area. These basics must be in place so that reducing the rat running can begin and you can civilise and return the neighbourhood to the people who live in it.

Despite the largest protests in Waltham Forest Council’s 50-year history in relation to our Mini Holland programme, we have taken thousands of daily motor vehicle movements out of our ‘Villages’. Clearly some has been displaced onto the main roads designed for that level of traffic, but much has evaporated. As you wander around these roads - as I do in my role as tour guide to councillors and officers from across the UK and overseas - you find yourself walking and cycling two, three or even four and five abreast along the roads that once took 3,000+ motor vehicles a day and if you do come across a motor vehicle it respects and understands you are the vulnerable road user in that interaction.

Anecdotally driver and active traveller interactions have improved hugely since we started this work. In our ‘Villages’ the motor vehicle is now the tolerated guest, rather than the needy and prioritised; and because the driver of that vehicle is more likely to live in that area, they are more likely to be known and people interact.

We have seen dramatic improvements in air quality, with a reduction of households exposed to illegal levels of NO2 from 58,000 to under 6,000, between 2007 and 2017. This is borne out by the research that we commissioned Kings College to undertake that also identified significant PM2.5 reductions. The conclusion from Kings is that a child born in 2013 in Waltham Forest, would live six weeks longer by 2020, as a direct consequence of our pioneering Mini-Holland highways interventions.

The ‘big infrastructure’ - build it and they will come

The conversion of Lea Bridge Road - our busiest road - into a ‘Street for Everyone’ has been a real challenge and has involved the removal of inefficient bus lanes, as well as the former Whipps Cross Roundabout and its replacement by the new Whipps Cross Interchange. We’ve planted 80 new trees, created a modern and future proofed bus interchange and handed back some 1800sqm of road space to Epping Forest to be reintegrated back into this ancient forest - the first time in the council’s history we have handed land back, rather than take for road expansions.

On Lea Bridge Road we’ve introduced new formal pedestrian crossing points, making it safer for pedestrians to cross where they want to cross, rather than where it was convenient for motor vehicles to allow them to cross, alongside Modal Filters on the side feeder roads and 8km of fully segregated cycle tracks into the neighbouring borough of Hackney. The result has been an increase in cycling of 118 per cent on Lea Bridge Road.

There is a constant stream of activities to support, help and enable more people to benefit from what we have built over the last six years. These include: free cycle training in groups of peers, family or women only groups, or even one to one; and free bike loans and a growing fleet of traditional and e-cargo bikes to try out before your family or your business decides to invest. We’ve also invested in 430+ on street resident cycle hangars, complemented by a network of seven (so far) Cycle Hubs at our major train and tube stations, which help reduce the barriers to include cycling as part of the commute and everyday short based journeys.

Our Annual ‘Walking and Cycling Community Fund’ which provides local groups with small amounts of funding to help them set up walking groups or targeted and specialist cycle groups; helping break down some of the perceived challenges and barriers that some face.

All the evidence over many years, from studies across the world, tell us that the interventions we are making with our Mini-Holland programme, are the right ones. If we are serious about reducing our dependence on the privately-owned motor vehicle and the societal, environmental, community, economic and health challenges that it has and continues to create, then the response needs to be big and bold. Tinkering’ and traditional approaches - literally managing the status quo - no longer cuts it. It isn’t easy and requires a huge amount of political will and effort. Residents need to be won over and plenty of people will kick back and be very angry, but plenty of people will also be on your side.

History will judge whether (and when we still had the time to make a difference) we provided the political leadership and did the right things in Waltham Forest. As I write, the UK is grappling to identify any positives from a COVID-19 inspired Lockdown. Surely the emergence of a clear appetite and ability to embrace walking and cycling, as part of our daily routines during lockdown, is up there? I’m in no doubt our Mini-Holland programme should form the blueprint to invest and embed that newly forged active travel appetite into the UK’s recovery and any ‘new normal’.