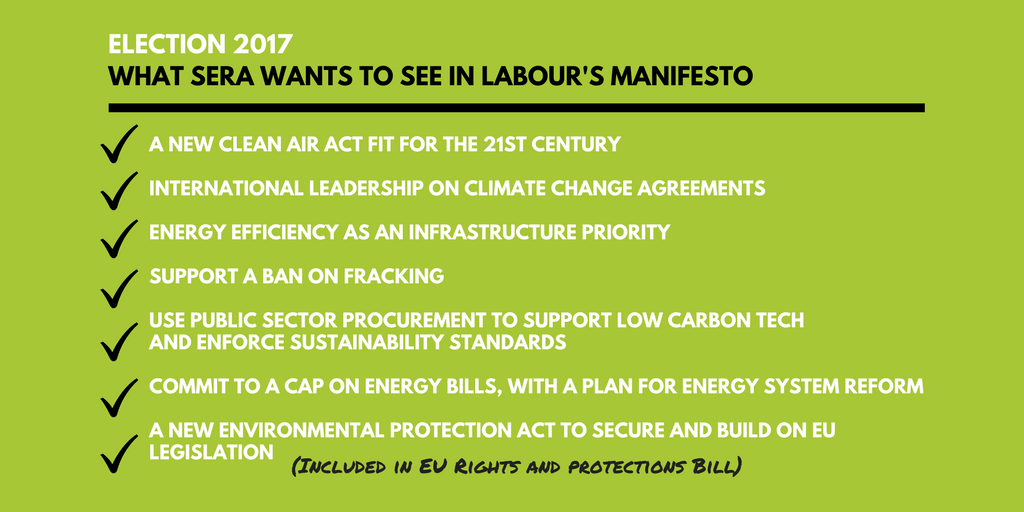 Since the General Election was called in April, SERA have been taking part in Labour’s manifesto process, calling for environmental justice to be at the heart of the party’s offer.

We’ve provided briefings for the Shadow Cabinet teams, asked our members to take part in public consultations, taken part in Socialist Societies meetings and submitted our own manifesto - published online here - to the National Policy Forum, which our Co-Chair Melanie Smallman is a member of.

Whilst the Conservative’s record of inaction and broken promises speaks volumes, Labour’s manifesto offers positive, concrete actions to tackle the environmental challenges facing the UK - pledges that will make a real difference to communities across the country.

SERA asked for Labour to show clear ambition on the green economy, to fuel sustainable growth and create decent, skilled, jobs. Today’s manifesto places the low-carbon economy at the heart of the party’s Industrial Strategy, with a commitment to clean energy cited as a fundamental mission. It’s ambitious target - 60% of the UK’s energy from zero-carbon or renewable sources by 2030 - will not just help drive private investment, but would also underpin public capital spending from the likes of the much-vaunted National Investment Bank.

Matching another SERA recommendation, Labour has further pledged support for the green economy via public procurement - a government asset that’s often overlooked, yet has significant influence. It will require those doing business with the government to match best practice on environmental protection, making use of the estimated £200bn local and national spending. This will help create a new market for the green economy and set a clear environmental benchmark for businesses across the UK.

Looking at energy, simply freezing bills is only half the solution - we argued for a Labour government to reform the energy market, with support for cooperative and municipal energy. Labour’s manifesto delivers this - with a cap on energy bills but also a plan to break the stranglehold of the ‘Big Six’. Publicly owned energy companies will - and indeed already have in Bristol and Nottingham - provide true competition, using their profits to lower tariffs for consumers and invest in renewable energy.

We campaigned for bold action on energy efficiency - an area so often ignored, yet with huge potential for both reducing energy use and cutting bills. The manifesto makes energy efficiency an ‘infrastructure priority’, with a pledge to insulate four million homes, saving on energy bills, cutting emissions and driving growth in a highly-skilled sector. It also commits to a consultation on new housing standards for ‘zero carbon homes’, the first step to ensuring sustainable housing.

Our ‘A Breath of Fresh Air’ campaign called for a new Clean Air Act to tackle the country’s toxic air pollution crisis. Labour has not just agreed to this, but pledged to introduce legislation within 30 days of office. This is supported by a commitment to investing in low emission vehicles and a retrofit programme for the worst polluting buses. Having called for the consideration of an independent enforcement body for air pollution, the suggestion of an ‘environmental tribunal’ is encouraging.

We also made recommendations on food and farming policy, where Brexit has left so much uncertainty, calling for a replacement for CAP that rewards sustainability. Labour’s manifesto supports this, promising to ‘reconfigure’ funds to support ‘sustainable practices’ as well as smaller farms. A ‘sustainable, long term future’ for UK agriculture will be Labour’s priority. There’s also a welcome  commitment to food standards, with the manifesto promising that Brexit will not be used as ‘an excuse to undercut our farmers and flood Britain’s food chain with cheap and inferior produce’.

We are expecting to hear more details on a number of pledges - including energy and the Clean Air Act, over the next few days, and we will of course be paying close attention to these. This manifesto does however offer real, concrete action on improving our environment, with bold policies and ambition.

SERA has long campaigned for Labour to show real leadership on the environment - this manifesto has taken that spirit to heart.