As part of SERA's push on plastics we want to encourage the Labour Party to be more ambitious. With plastic at the top of the political and environmental agenda and the Conservative government taking little if any concrete action, we want Labour to think about plastic pollution within the Party which we hope will enable conversations and a cultural shift paving the way for green world leading progressive policy. 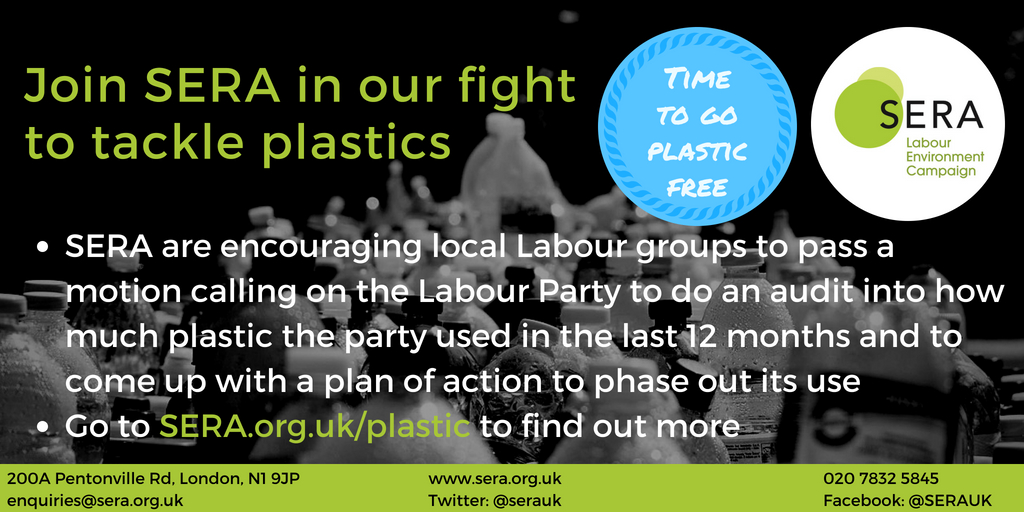 Below is a motion to pass at your next CLP meeting and scroll down further for a draft motion for Labour Councillors and councils.

Vote on this motion at your next CLP meeting

This motion has already been passed by over 30 CLPs across the country - please take the motion to your CLP, vote on it and let SERA know when it has been passed by sending me an email at [email protected] and tweeting SERA at @serauk with the hashtag #PlasticFree.

The Labour Party’s use of plastic

That the use of plastic when not properly recycled has a detrimental impact on our environment.

That the Labour Party is currently using a large unquantifiable volume of plastic and currently does not have a plan or strategy in place to phase out its use.

That the Labour Party should be leading the way and setting an example as an organisation that does not use plastic where ever possible.

That the CLP Chair and Secretary are to write to the Labour Party General Secretary and Shadow Secretary of State for Environment, Food and Rural Affairs to request that an audit take place on how much plastic the national party has used in the last 12 months and to come up with a plan of action to phase out its use with the findings to be presented to conference.

What this Council believes:

This Council therefore commits to: