Clive Lewis MP is Shadow Treasury Minister for Sustainable Economics and Labour MP for Norwich South. He tweets at @labourlewis and calls for a post-war effort to tackle the climate and environment emergency. 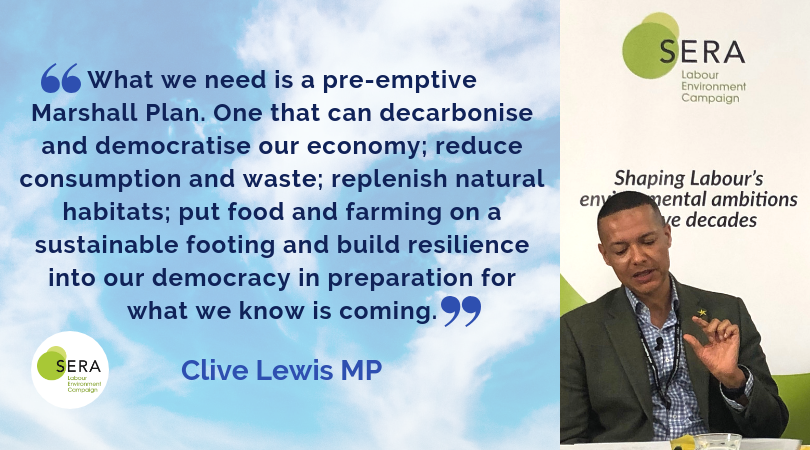 Getting your head around an existential threat to the entirety of human civilisation is no easy thing. It’s why World War Two analogies are often deployed to describe the sheer scale of the challenge the Climate Crisis presents to us as a society. But in many ways, it’s actually the post-war rebuilding that better resembles the type of challenge that confronts us here in the 21st century.

After the War, we were confronted with a devastated European continent, a global political and economic order in tatters, millions of displaced people, hunger and the looming threat of further conflict with the Soviet Union. In the context of the here and now, much of this is yet to happen (although I would argue the early warning signs are here). And yet we know, according to the science, that systemic ecological and climate shocks are coming. In fact, in the global South they are already here. Arguably, when these shocks start to happen all across the world, global civilisation will be left in a worse state than 1945.

What we therefore need is a pre-emptive Marshall Plan. One that can decarbonise and democratise our economy; reduce consumption and waste; replenish natural habitats; put food and farming on a sustainable footing and build resilience into our democracy in preparation for what we know is coming.

Enter the ‘Green New Deal’. Here in the UK the Labour Party has coined the term, ‘Green Industrial Revolution’. Whichever you prefer, the key words to note are ‘new’ and ‘revolution’, shorthand for radical, systemic change. A bold decree that the art of the ‘politically possible’ must now make way for that of the ‘scientifically necessary’. Here in the UK that means net zero carbon by 2030 and zero carbon by 2050 (on UK consumption figures, not just production) if we want to remain in our ‘fair carbon budget’ threshold.

But the GND is so much more than just an economic strategy to decarbonise the economy. It’s an entirely new political economy whose contents are being constantly updated and debated. It will need to cover everything from health to defence, accounting to law, food security to new democratic national and global institutions. It will need to be a blueprint not just for the problems we face today but also the ones our children will face tomorrow.

Of course, no plan survives contact with reality. The future cannot be predicted exactly. This is exactly why our watch word must be ‘resilience’ i.e. the ability to endure and then quickly recover from difficulties. We must build it into our economy, our democracy and, if we’re honest, most importantly, our people.

In a democracy it’s us, the people, who are the most important resource we have. It’s our political choices, our decisions to change things, to maintain things, to determine our values, to decide how to respond and how to pre-empt; it’s our ingenuity, our compassion and our determination. It’s all these things and more that will shape and determine the future of our democracy in these perilous times.

That means an education system fit for purpose. Teaching children, the skills and knowledge they will need to critically assess and question the world around them. To see through fake news, demagoguery and lies, and possess the confidence to challenge power. To resist the ever-lurking threat of ethno-nationalism. To understand and grasp a world of AIs and the power of data. To be scientifically literate. To understand that history can show us democracy’s past failings but cannot alone predict what form future threats will take.

This is the challenge the Labour Party now faces. Grappling with policies not for the 20th century, not even for today, but those that can prepare us for what we face tomorrow. A tomorrow that is already here for many parts of the Global South.

The 2017 Labour Party manifesto was in many ways a social democratic reset. It was a reaffirmation of the values we embraced to rebuild Britain after a devastating war. Values which saw public good trump private good. Where the 99% were put before the one.

After 40 years of embracing neoliberal economic dogma, democratic socialist parties across Europe paid a high price for forgetting those basics. If we forget them again, if we fail to step up to transformative change, unparalleled in peacetime history, it will be much more than mere elections we lose.