In less than 3 weeks, New Zealand will go to the polls to choose its next government.

Jacinda Ardern, the Leader of the New Zealand Labour Party has written for SERA about how, if elected, her party would tackle climate change 'head-on'. 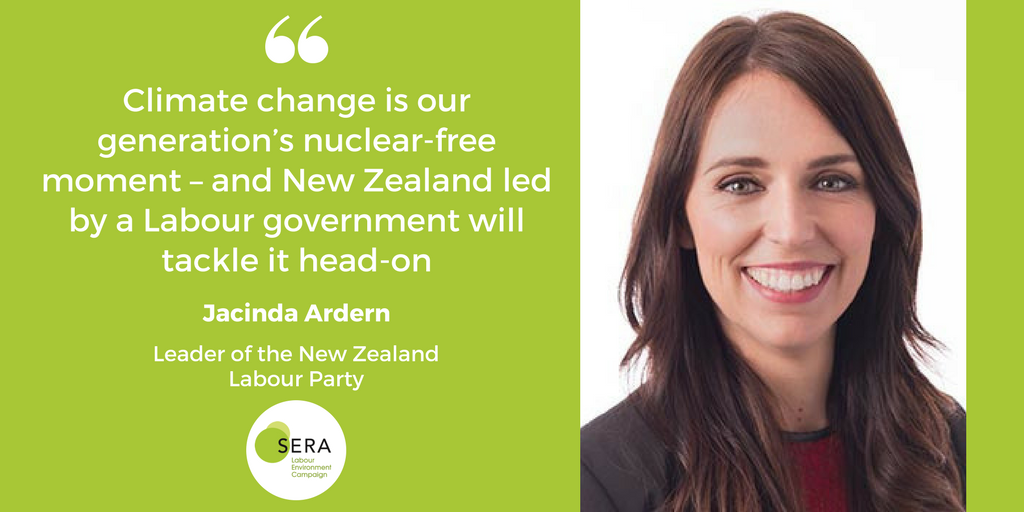 Climate change is undeniably one of the greatest threats that we face in our world today. From developing countries in the tropics buckling under the weight of huge storm surges to coastal cities in America where the sea often meets the road, few countries can escape the effects of global warming. The 2015 Paris Accord was a huge accomplishment, with 195 countries signed on and at least 160 having since ratified. Despite a successful agreement, Paris was just the beginning and we still have a long road ahead.

New Zealand is responsible for small total of emissions on a global scale, with an average of 0.1% of global net greenhouse gas emissions per annum between 1990 and 2011. It’s this tiny number that’s used in a string of excuses by the National government to justify a lack of action on climate. We are relatively unique in that almost half of our emissions come from agriculture, a sector that is still not required to account for either methane or nitrous oxide. The current National government has chosen to focus funding on finding a miraculous “silver bullet” for reducing agricultural emissions and are simply delaying the inevitable. However it’s not just agriculture where they’ve opted for negligence. When it comes to reducing carbon emissions domestically, the Government will instead spend up to an estimated $1.4 billion per annum over 10 years on international carbon units to offset emissions. A blinkered dependence on international carbon credits leaves our country exposed to serious risk.

Carbon budgeting is crucial to meeting our targets and Labour has looked to the example of the United Kingdom. We will establish an independent climate commission because we firmly believe that proper carbon budgeting delivers results, something we’ve seen from the UK, where carbon budgeting has seen emissions drop 45 per cent since 2008. It will also allow us to take the planning out of the hands of politicians and remove it from the short-term thinking that accompanies our three-year electoral cycle. An independent climate commission will determine where and how we reduce emissions across our economy and these budgets will be legally binding.

Labour will also address agriculture. Our Emissions Trading Scheme, weakened by the current government, will include all sectors. A science-led discussion must be had about the relative impacts of short-run and long-run gases, and how to account for them. It is not feasible to wait for cows to cease emitting, or to spend billions offshore on credits while emissions rise at home. The sooner we face up to this issue, the more likely it is that we will be able to ease the path for exposed industries, and continue to innovate as we respond to this global challenge.

The Government that I lead will not settle for a lack of action. The New Zealand Labour Party has a history of putting people first – it strikes to the very core of our values. That means we need to put plans in place to protect our communities and individuals, and to achieve positive outcomes for workforces in changing industries. Climate change will bring with it the most significant economic transformation in modern history. Industries and workforces currently employed in high-emission industries must not be consigned to the scrap heap as we respond to the shocks of unplanned and urgent economic upheaval. Offering the right qualifications and skills in the regions where they’re required is the kind of joined up thinking from a progressive and future-focused government that will ensure that we minimise the shocks and ensure a "just transition" to a low-carbon economy.

Our changing climate brings with it many challenges but also enormous opportunity. A chance to diversify our economy, to put the environment front and centre and to do the very best we can for our country and the planet. New Zealand is a small country but it has never stopped previous Labour governments from ensuring we play our part or do what’s right. Prime Minister Norman Kirk did not think us too small to protest French nuclear testing in the Pacific in the 1970s and David Lange did not think us too small to say no nukes.

This is our generation’s nuclear-free moment – and New Zealand led by a Labour government will tackle it head-on.