The London Mayor Sadiq Khan has spoken about his plans to create a less polluted London – he stated that ‘poor air quality is a ticking time-bomb for our health.’

An estimated 50,000 deaths a year are being caused by outdoor air pollution - much of it from diesel vehicles. In April 2015 Client Earth won a landmark Supreme Court judgement against the British Government. The judges ruled that the Government was not acting quickly enough to meet air quality targets and forced them to come up with a revised plan by the end of 2015.

Client Earth believe that the UK government is still not doing enough to tackle air pollution, even with its new plan, and so have taken them back to court this month. The Government’s plans to create Clean Air Zones in the 6 worst affected cities means that, with Labour controlling all of them, the party is in a unique position to reduce air pollution from its current critical levels.

Addressing the current air quality crisis provides Labour with a major opportunity to improve the health and well-being of everyone in society, but especially those living in poorer neighbourhoods. One of Sadiq Khan’s first actions as London’s Mayor was to release a previously unpublished report which showed that 433 schools in the capital are located in areas that exceed EU limits for nitrogen dioxide pollution – and that four-fifths of those are in deprived areas.

So what should these Labour-controlled cities do to right this injustice? The plan up until now has been focused on reducing carbon emissions and this has leant heavily on the deployment of electric and hydrogen vehicles, which is happening but nowhere near quickly enough to give us the cleaner air we all so urgently need.

Another part of the solution was seen to be diesel as it was believed to be low carbon and that new vehicle technology would quickly sort out the air quality problem diesel is causing. But then the Volkswagen scandal broke last September which revealed that the existing vehicle testing regime might not be as robust as everyone had been led to agree.

Only last month a report from the environmental NGO T&E revealed that not one major diesel vehicle brand complied with the latest “Euro 6” air pollution limits when driven on the road. In fact, some makes are emitting up to fifteen times the European standard for the most damaging pollutant nitrogen oxide.

Don’t get me wrong, electric and hydrogen vehicle deployment needs to continue and be increased, but there’s no way that they can address the air quality crisis quickly enough and that other vehicle technology options need to be used.

Obviously we at Calor are pleased that our product LPG has been recognised as being part of the solution. A nationwide refuelling network of over 1400 LPG filling stations is already in place and the vehicle technology is already well developed and understood. As such LPG offers an extremely quick and low cost solution to addressing air quality issues.

An early example of LPG in action comes from Labour-controlled Birmingham City Council where 63 diesel-powered black cabs are to run on LPG – this is in line with the city’s NOx Reduction Champions project.

A TX4 diesel taxi converted to run on LPG delivers a reduction in NOx of 80%, PM of 99% and CO2 of 7% meeting Euro 6 standards under real world testing. Furthermore, the taxi driver will achieve a reduction in fuel costs compared with running on diesel taxi. LPG is also future proof. Toyota has an Electric/LPG hybrid, the JPN Taxi, which will be sold to Tokyo’s taxi drivers from 2018 for only c£16,000. At present, 90% of Tokyo’s taxis run on LPG. In addition, we have bioLPG landing in Britain next year.

We currently have a converted diesel taxi on the streets of London going through its paces so it can get approval from the Public Carriage Office later this autumn.

Once it’s done that it will be available as an option to London’s cabbies who are already up against it with the challenge of Uber. The London Mayor has already announced plans to even up the playing field against Uber and we are hopeful that he will do more to support cabbies move from diesel to LPG to get cleaner taxis which are cheaper to run.

Labour has a long and proud history of showing leadership on environmental issues with Labour’s 2008 Climate Change Act setting the legislative benchmark at a global level.

Addressing the current air quality crisis provides Labour with a major opportunity to improve the health and well-being of everyone is society, but especially those living in some of Britain’s more deprived urban areas. Sadiq Khan is already blazing a trail in London and please be assured that we at Calor are ready to provide help and support, in London and cities right across Britain, to deliver the cleaner air we all so urgently need.

Paul Blacklock is ‎Head of Strategy & Corporate Affairs at Calor 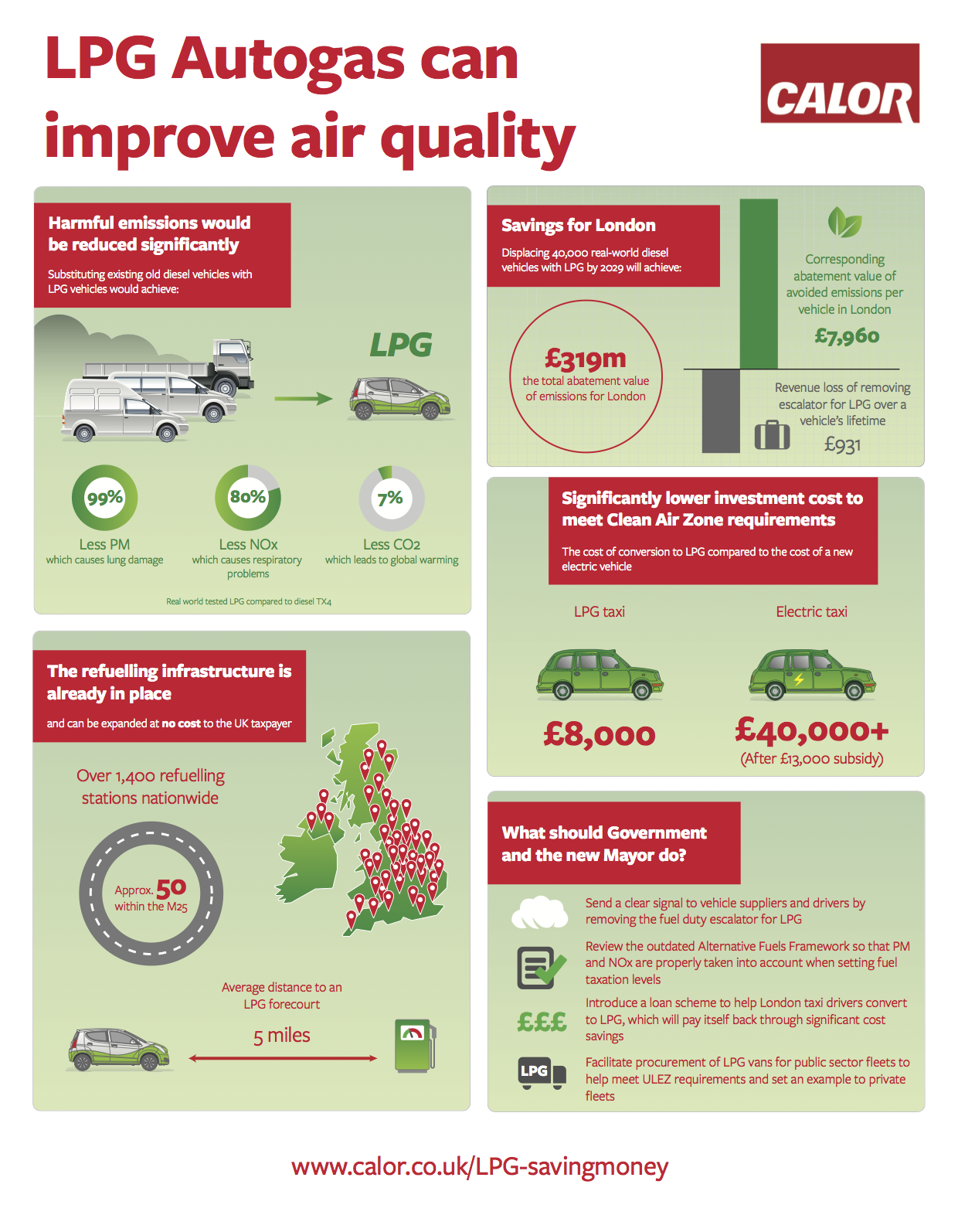