Getting work and workers into the cleaner air equation

Mick Holder CMIOSH, is an occupational and environmental health and safety journalist and campaigner. This article was originally published in the Autumn 2020 edition of SERA's flagship magazine, New Ground. 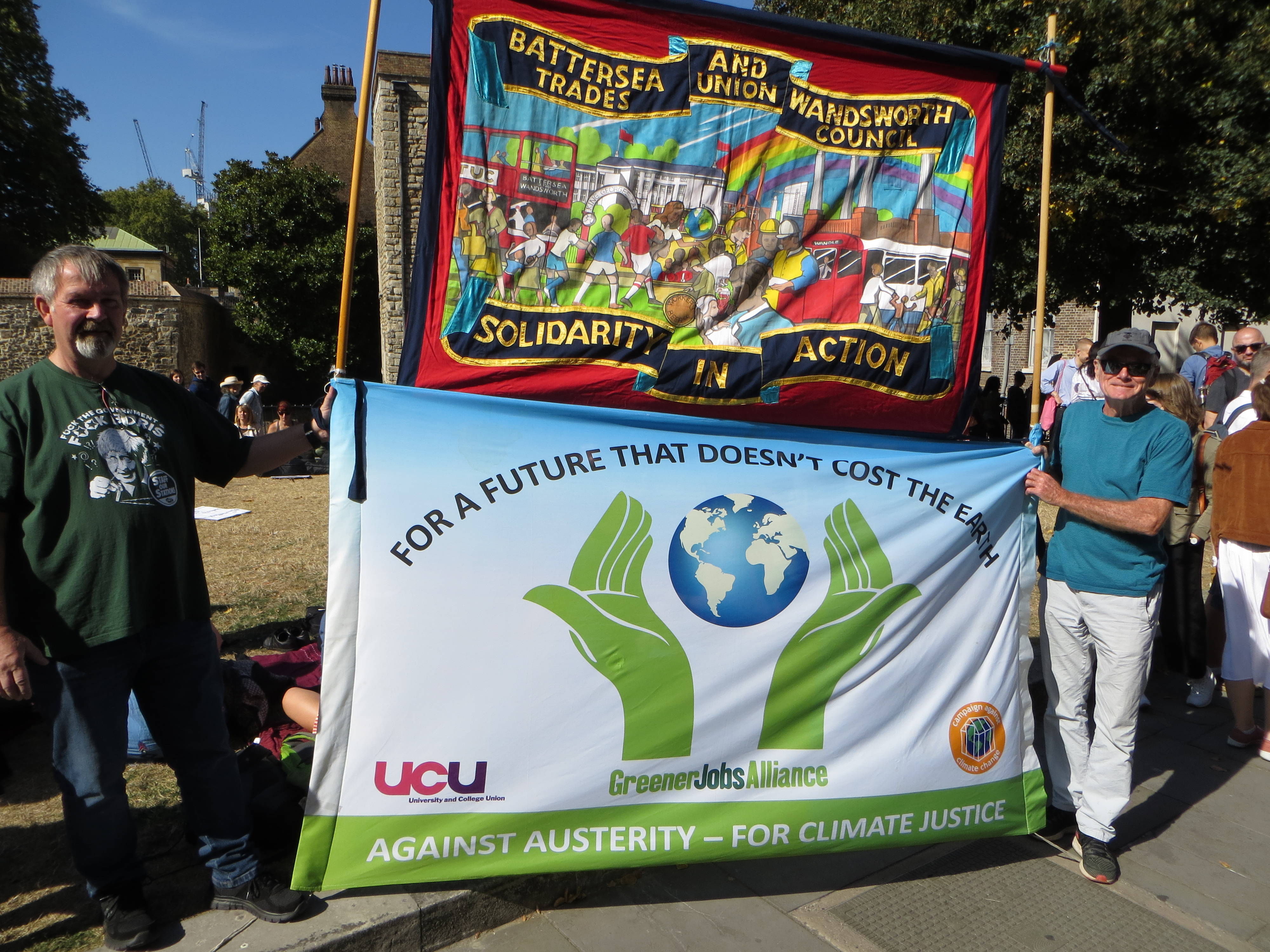 Whilst climate change and pollution have risen up many people’s agenda recently following noise and action from the school climate strikes and the likes of Extinction Rebellion and David Attenborough, the role of work, workers and their representatives hasn’t risen as high or as fast. And that’s despite the efforts of many campaigners and which is why TUCAN, the Trade Union Clean Air Network, was created to try and address those issues.

For the last ten years, Greener Jobs Alliance (GJA) has been campaigning for action on climate change and pollution, effectively green jobs and a green new deal, all with trade union involvement. Whilst the Hazards Campaign, Hazards Magazine and many unions had been encouraging action on air pollution at the workplace it became clear that air pollution arising from work was an issue that should be singled out for a national campaign and TUCAN was created. Since then TUCAN has gained the support of many trade unions who have adopted the TUCAN Charter (see box). And then came COVID-19.

The link between the quality of the air we breathe and poor health is well established and the news from science isn’t getting better. Monitoring of spaces such as Oxford Circus in London’s West End or The North Circular in Walthamstow, London give evidence to what we already knew, engine combustion by-products, tyre and brake dust etc. are at very unhealthy levels.

What has been news is the evidence that pollutants can cross to unborn children and through the nose into the brain - and some of those pollutants are carcinogens and capable of affecting the growing child. Something many in the international hazards movement have been raising for many years. It is also further underlined by the quote from the UN’s Baskut Tuncak in the New York Times: ‘The people most likely to die from toxic fumes are the same people most likely to die from COVID-19’ which can be added to concerns airborne dust is possibly a vector for COVID-19 and other viruses. The case for radical action is clear.

Until fairly recently the link between the causes of unhealthy air quality and climate change was not made. This has now changed with the recognition that addressing air quality issues contributes to action against climate change - something TUCAN is happy to use as a lever for action.

Historically, when societal change has had to happen it’s difficult not to be cynical about the way it has been done and potentially will be done - those who can make money out if it or dodge the issue do, and those who can’t struggle to deal with consequences, often with disastrous results.

With the recognition of the scale of action necessary on air pollution and climate change it’s not unreasonable to raise that concern. However, there is a solution - just transition, a principle whereby the need for change is recognised and implemented with the participation of the workers affected in an attempt to eliminate or reduce the potential negative effects of those necessary changes such as retraining, loss of earnings etc.

(A free on-line training course on the just transition by the GJA is available on their website:

The first and most obvious effect of the COVID-19 shut-down is the clear and undeniable scientific evidence around the world that air quality has improved dramatically in industrial societies since the pandemic started and that improvement was quick and startling.

This evidence has rightly been used by many to argue that this is a massive opportunity to act for a safer and healthier future and must require any bail-out or post-COVID-19 plans to have action on climate change and pollution at their core. But, it has already been reported that industry’s lobbyists have been actively seeking to avoid this. One example is the airline industry who has been accused of trying to dodge their responsibilities by saying any such restrictions now will affect their ability to survive post- C19.

Oh yes, they do! Historically unions have been very active on many green/climate change/air pollution issues, locally and nationally. Transport unions have campaigned for the electrification of the railways away from diesel, negotiated diesel train and bus anti-idling policies, and for new electric vehicles etc. Others include a union-led community campaign of air monitoring in town centres and monitoring on buses.

Whilst it is clear the elephant in the room are energy generation workers, notably nuclear and gas, whose unions strongly defend their work and employment, the rising climate and green issues will not go away and the recognition of a just transition by all involved as the best way to address these issues is now well established.

Unions CAN do something

Whilst ultimately action will be down to Government policy, businesses and employers, trade unions are in a position to push all of these for positive change following just transition principles - with many rights in law. Those trade unions recognised for collective bargaining by employers can apply ‘The Safety Representatives And Safety Committee Regulations’, law that allows for the appointment of trade union health and safety reps in workplaces and for them to request a safety committee be set up (if one doesn’t exist already).

Safety reps have legal rights to inspect the workplace, talk to workers and to raise issues with their employer. It has long been argued that safety reps adopt green issues and raise them with colleagues and employers, and very many have.

COSHH and toxics use reduction

One of the main drivers for this was the advent of ‘The Control Of Substances Hazardous to Health (COSHH) Regulations’ and the hierarchy of control contained within them. The hierarchy follows basic occupational health principles, i.e. if you can do work without using a hazardous substance then do so, if you have to use a hazardous substance then use the least harmful, contain or prevent the spread of any toxic substance by enclosure or extraction etc., and lastly provide any necessary personal protective equipment (PPE).

The hierarchy is meant to be followed strictly with change or substitution as the first option and issuing PPE as the very last one. Many union reps used COSHH to argue for employers to review and reduce the number of toxic substances they use. Examples such as moving away from solvent based substances to water based, removing or reducing the use of pesticides in construction and parks and gardens, and campaigns against diesel fumes at workplaces.

Campaigning for a healthier future

The result of last year’s general election hasn’t filled many climate and pollution activists’ hearts with optimism. However, the equation of the Government listening to climate deniers and their perpetual lobbying vs. the unavoidable amassing of evidence of the need for action added to the COVID-19 world is yet to play out. With the Government’s pledges on action already being called too little too late added to the urgency of the situation it’s not looking great. But, there are opportunities for campaigners to make their voices heard. The Government has published a new Environment Bill. Campaigners are pushing for tougher standards and action as the published bill does not meet current World Health Organisation standards and leaves the door open for weakening existing standards. And campaigners have been preparing to be heard at COP26 in Glasgow next year.

Post COVID-19, TUCAN will continue to use its contacts to get its message across with unions at workplaces, through trades councils, and regional, national and international conferences. We will also build links with local councillors, councils and regional bodies to find ways of using air pollution monitoring data to inform workers and employers and involve them in planning remedial actions.

We will also continue to work with other organisations such as the Healthy Air Campaign which is convened by Client Earth and supported by a number of NGOs and campaign groups. And we’ll be watching developments arising from other initiatives such as the British Safety Council’s time to breathe campaign.

We have teamed up with other air pollution organisations and will be using air monitoring equipment in and around workplaces to record and illustrate workers exposure and be helping safety reps and others raise concerns with employers, industry and government. There is much to do.