Cleaning up our dirty air is nothing if not a shared endeavour. So any plan to do this must involve everyone who has a hand in creating the pollution

Environment cabinet member in Camden, Adam Harrison on the borough's clean air plans. The council are looking for your views and ideas and urge as many as possible to take part in their consultation. He tweets at @AdamDKHarrison 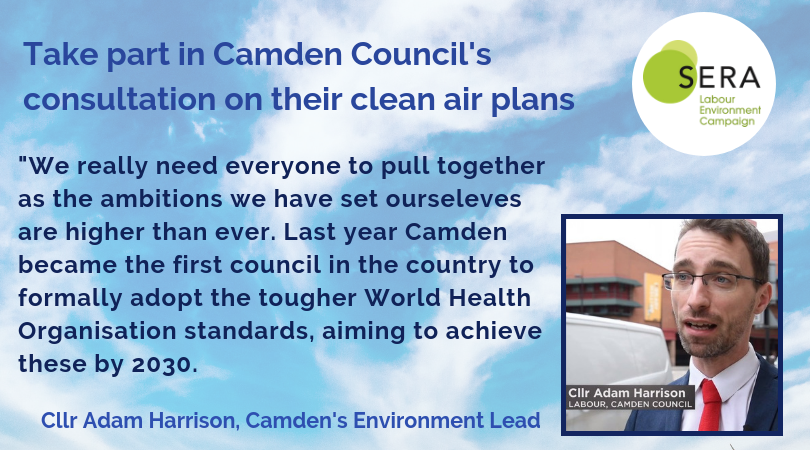 At Camden council we are now on the last lap of gathering views on our draft air quality plan. This is not the first such plan we have produced – unfortunately, like other urban areas we remain designated as an Air Quality Management Area, meaning we are obliged by law to set out what we intend to do about the breaches of air pollution levels we experience in the borough.

But it is the first time we have explicitly set out to involve those who help create air pollution, as well as giving space to hear the voices of those who are affected by it. Of course, these two groups overlap. So to that end last year we established the Camden Clean Air Partnership, comprising the council, of course, but also: businesses like Kier construction and UPS delivery firm; transport representatives like TfL and taxi representatives the LTDA; community groups; Network Rail; and even the National Barge Travellers Association, reflecting the presence of the Regent's Canal running through the borough and the pollution its use can create.

You can see some of the ideas we came up with here. In terms of Camden’s own actions, they range from funding greater monitoring and enforcement of the air pollution that arises from the construction process; to reducing the amount of diesel generators used in construction; to lobbying the government to tighten up smoke control legislation (such as from wood-burning stoves). On the transport front we currently envisage reducing road traffic by up to a quarter by 2041.

Among the partnership members: John Lewis Partnership proposed that Waitrose use lorries run entirely on biomethane gas generated from food waste; Great Ormond Street pledged to seek to consolidate patient transport; and UPS to bring in electrification of its depot.

And we really do need everyone to pull together as the ambitions we have set ourselves are higher than ever. Last year Camden became the first council in the country to formally adopt the tougher World Health Organisation standards, aiming to achieve these by 2030. On current measures the borough is compliant on Particulate Matter. Yet this stuff is really dangerous. We have long made clear that there is no safe level of Particulate Matter. It makes sense, therefore, to aim for the much more stringent levels as set out by the WHO. It was pretty disappointing that Michael Gove's recently released clean air strategy did not similarly adopt the WHO standards. He fluffed his first opportunity to show how a Green Brexit could really go beyond EU standards.

But for Camden to get there we need to know how much difference the actions arising from the partnership will make.

To this end King's College London has investigated the relative impact of our local actions and those made at regional and national level by London's mayor and the government. It also takes into account the decisions made by countries elsewhere in Europe – air pollution travels, of course.

The full updated set of results from the Camden-King's WHO study will be available in April, and will shed real light on what we need to do: what levers we will have to pull; how hard we have to pull them; but also what big asks we need to make regionally, nationally, and internationally. We think, for example, that Sadiq Khan's Ultra Low Emissions Zone coming into central London and extended in 2021 will be a big bang – or at least a medium bang –change that will make a big difference. But achieving acceptable air quality remains a big challenge and we need to know where to look and who to ask more of. Crucially, we all need to be signed up to this and to be sharing our successes, and our failures, with each other so we can continue onward in a spirit of shared endeavour. As SERA members know, we achieve more together than we do alone.

You can find out more and take part yourself in Camden's consultation on our clean air plans here. Please let us know your views and your ideas. Who else should be taking part and what should we be asking them to do?