CLEAN AIR FOR THE KIDS

Environment cabinet member in Camden Adam Harrison on understanding what a ‘WHO-compliant’ borough looks like when it comes to the harmful issue of air pollution.He tweets @AdamDKHarrison 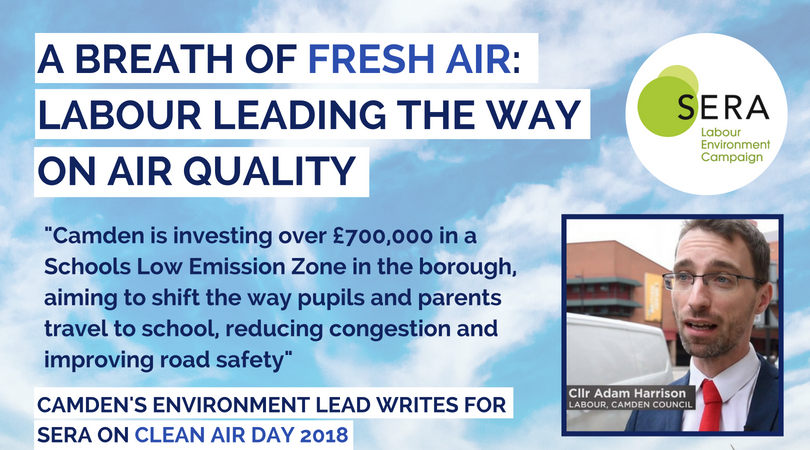 Today is national Clean Air Day and I began it as any councillor with responsibility for transport and air quality might: standing on street corners, peering at passing traffic.

The public's awareness of air pollution has shot up the agenda in recent years, and they now, rightly, expect more of their local councils. They want us to take action that will make real inroads into the issue.

This year Camden Council became the first in the country to formally adopt World Health Organisation standards of air pollution. This is an ambitious target, but we have long said that there is no safe level of particulate matter in our air. So it made sense to give extra prominence to the WHO targets which reveal that the borough falls short on this front. The more usual EU pollution limits suggest we are compliant.

So, we are looking to make progress in every corner of Camden, and playing a particularly important role in this are our schools. Citizen science identified a problem with bad air near the large concentration of schools in the Hampstead area – and it was here that I was this morning, meeting parents concerned at the heavy impact of the school run on the pupils attending these schools – often driven in from miles around – and on residents living in the local area.

Camden is investing over £700,000 in a Schools Low Emission Zone in this part of the borough, aiming to shift the way pupils and parents travel to school, reducing congestion and improving road safety at the same time. This follows on from our Healthy School Streets programme where we work with schools taking part in the STARS programme. We invest in changes to the road infrastructure outside schools to keep polluting cars away from school grounds and discouraging parents from opting for the car when they could choose an alternative means.

Speaking to one headteacher this week, she was clear that the views of the kids are what will make the real difference. Lessons in which children learn to identify the signs of pollution on lichen, and learn about the impact on their lungs, can bring about a change in behaviour. I often think about the anti-smoking campaigns when I was a kid and how that cut through and never left me.

We also need some good research into the impact of the STARS programme now, and also to understand how we might further influence car owners to change their behaviour further. Certainly this is a more viable proposition in a city with a well-connected and (despite the £700m cut to TfL from the Conservative government) effective public transport network.

But with the city still growing and congestion set to do so too, we need to go even further than we have done already to make the difference to air pollution and how we move around. I hope Camden's own work into what a 'WHO-compliant' borough looks like will help break new ground in our understanding of the issue but, as importantly, in how to bring together all the key players – including polluters – to bring about real change over the next few years.