Andy Burnham: The Problem with Plastic and my vision for Manchester

Andy Burnham, Mayor of Greater Manchester writes exclusively for SERA on the plastic problem and his vision on making Manchester a plastic-free city. This article first appeared in SERA's publication New Ground in Summer 2018. New Ground is sent free to all SERA members but past issues are available for all to read online here. 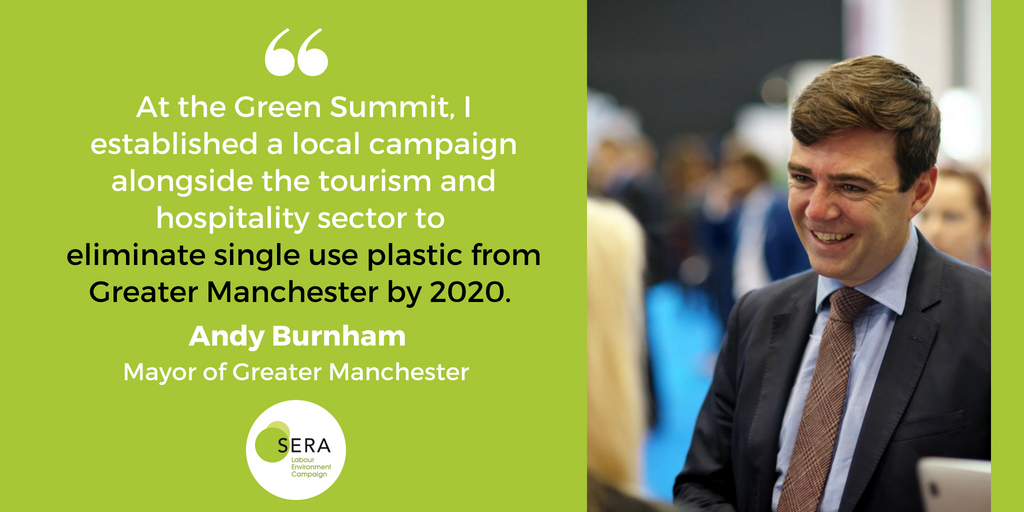 Blue Planet 2 was instrumental in raising awareness of the global plastic problem. Whilst it is widely accepted that the majority of plastic waste found in the oceans mainly originates from countries in Asia, with less waste management infrastructure in place, days before the Greater Manchester Green Summit in March 2018, it was announced that the most plastic polluted river in the world was the River Tame in Tameside, with the highest levels of micro plastic recorded. Although this finding was from a very small number of rivers sampled globally, it is clear that plastic pollution is a threat to our natural environment wherever you live.

At the Green Summit, I established a local campaign to eliminate single use plastic from Greater Manchester by 2020. Supported by over 50 local businesses from the hospitality and tourism sector, there is an appetite for change and it was clear from the support from businesses, academics and our residents who attended the Green Summit that together we can lead the way in creating one of the first single use plastic free cities.

Plastic is an essential part of our daily lives. Due to its unique properties, it has many useful and essential functions. For example, it can help to save fuel and cut carbon emissions due to its lightweight properties in planes; used in food packaging it can help to ensure food safety and extend the life of the food thereby reducing food waste. However, it is clear that the way plastics are produced, used and disposed of is causing a global environmental problem and, if left to continue, the damage is irreversible. Millions of tonnes of plastic litter and waste are entering our environment and some plastic takes hundreds of years to break down.

Single use plastic packaging, those that are thrown away after one brief use, are rarely recycled and are more prone to being littered. These include packaging, some bags, disposable cups, lids, straws and cutlery, for which plastic is widely used due to its lightness, low cost, and practical features. These types of single-use plastics items are a major source of plastic leakage into the environment, as they can be difficult to recycle, are often used away from home and littered. They are among the items most commonly found on beaches, and represent an estimated 50% of marine litter.

Following the announcement at the Green Summit, Greater Manchester’s tourism and hospitality sector have set a target to eradicate the use of single use plastics by 2020. This is as part of a wider sustainability campaign. The first step is to remove single use plastic straws, in exchange for a much more sustainable alternative. The campaign will be led by industry and supported by the Greater Manchester Combined Authority, for example we will aim to reduce the cost of alternatives for plastic straws through encouraging collective purchasing to reduce the cost and drive change, linking businesses from across the city. In June, I’m holding a round table with NUS and Greater Manchester’s Universities and colleges to assess whether we can create the UK’s first single use plastic free campus.

Michael Gove recently announced that plastic straws could be banned in the UK, however the announcement related to a consultation on a ban and I believe that what we need is action. Greater Manchester is a region renowned for innovation – we’re large enough to experiment at scale, yet nimble enough to come together and innovate at speed. The Green Summit is a great example of a unique event that’s brought people together to reduce our carbon emissions, crowdsource ideas to make Greater Manchester one of the greenest city-regions in Europe. At the summit, I also set out my ambition to bring Greater Manchester’s carbon neutrality target forward by at least a decade from 2050, to double our electric

vehicle charging infrastructure and to explore the creation of a GM Energy Company and GM Environment Fund.

The Government are also consulting on a single use plastic bottles Deposit Return Scheme (DRS) which will help to tackle ‘on the go’ litter. The proposals are aimed at reducing waste from littering. Whilst I believe that this initiative will have a positive impact on litter, it does need a holistic approach to ensure it is integrated into current kerbside recycling collection schemes operated across the UK.

For years we’ve relied on recycling to combat the plastic problem. In Greater Manchester, we currently recycle 47% of our household waste. However, as there is a limited plastic recycling industry in the UK, we currently only collect plastic bottles for recycling (all types including toiletry bottles such as shampoo and shower gel bottles as well as milk and pop bottles). Greater Manchester has the UK’s third largest Low Carbon Environment Goods and Services (LCEGS) sector, outside London and the South east. I’m keen to see the sector grow further and faster and seize the global opportunities that are emerging as we collectively strive to be kinder to our planet.

Other types of plastic food packaging such as pots, tubs and trays are mainly made out of low grade plastic that cannot easily be recycled and there is little demand for it from manufacturers. There is also no financial incentive for manufacturers to use recycled plastic in their products, which means they are able to create new plastic products out of virgin materials. This is something that I hope will be addressed through the Government’s recent call for evidence to examine how changes to the tax system could tackle the problems associated with single use plastic waste. An important aspect of tackling single-use plastic waste is innovation in more sustainable products and processes, and the Chancellor has also announced a new allocation of £20m of funding to businesses and universities to stimulate new thinking and rapid solutions in this area.

Some retailers and supermarkets are already starting to improve their packaging by using fewer different types of plastic to make it easier for this to be recycled. Whilst this is a step in the right direction, this needs to happen on a much larger scale. Innovation is what Manchester is well known for and I’m keen to see investment in this area to create some economic and green job benefits for the conurbation.

The plastic problem needs a joined up collaborative approach. Reducing single use plastics in Greater Manchester is a good start, but we need significant investment in alternatives and in the technology to recycle other types of plastic; Greater Manchester has the appetite to lead the way.