Join SERA About Us Get in Touch

Sign up to get the latest news, views and events with fortnightly emails from SERA

Bridging the Social and Environmental Movements since 1973

At SERA, we believe that tackling environmental problems is key to delivering opportunity and fairness. From climate change to community energy, waste to transport, SERA is interested in the most important environmental and social challenges facing Britain – challenges that only Labour administrations can tackle. 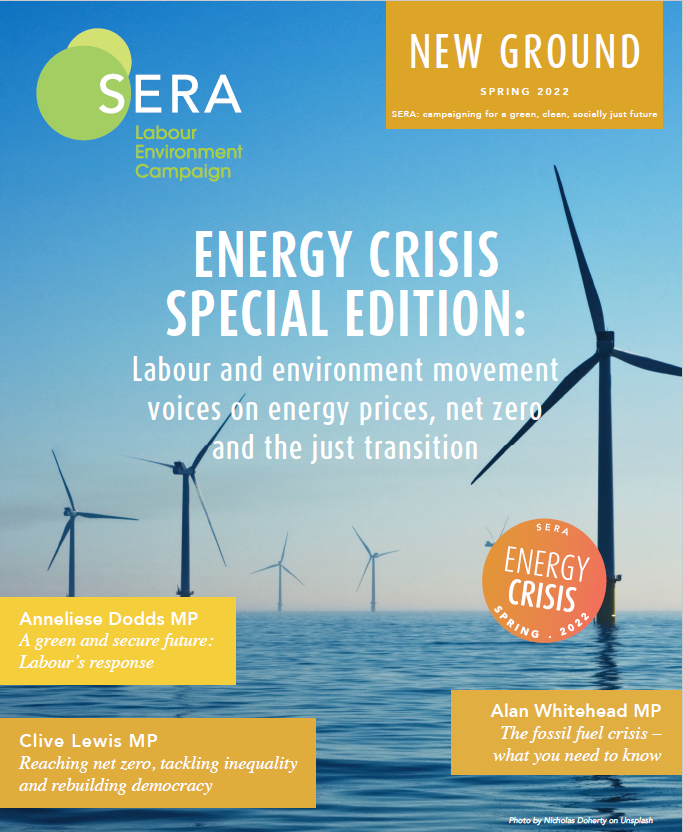 On 1 April the energy price cap was raised with energy bills leaping to the highest levels in living memory. It is another manifestation of the worst cost of living crisis for decades and which is causing financial problems for millions of people.

Given this crisis we have produced a special edition of New Ground to bring these the issues, challenges and path ahead into sharp focus.

As the IPCC has recently said, far from the crisis being a reason to push for more fossil fuels such as fracking and opening up oil fields that some are advocating, the crisis should be leading to an acceleration of the generation and use of renewables.

The crisis has actually demonstrated why accelerating renewable energy generation is vital. It gets us away from the inherent volatility of fossil fuel prices, the insecurity of supply and the reliance on dodgy regimes. Renewables bring a democratisation of energy. We must wean ourselves off fossil fuels too to meet carbon reduction necessities and mitigate the biggest security issue we face - global heating.

Just as there should be a huge acceleration of renewables - the cheapest form of energy generation and the quickest to increase capacity - immediate respite must be provided to those facing higher bills as well. Labour has outlined a plan to do both - to reduce bills including through a windfall tax on the oil companies that are making billions from the price hikes; and to decarbonise our energy supply.

The government's latest energy strategy is dismal and is a huge missed opportunity for real investment in renewables. Onshore wind is the cheapest, safest and cleanest form of renewable energy.

We could have onshore wind next year coming on stream, and this would have a direct impact on the ongoing cost of living crisis as well as the necessity to achieve net zero; the government’s excuses for not including this in their strategy are farcical.

It is action that the Conservative government continues to fail to take and follows the inability to put in place a credible energy efficiency programme which would have reduced home energy demands, and thus bills. While the government vacillates other countries such as the French government have capped bills at 4%.

These issues and more are explored in this edition of New Ground.

We have pieces from senior Labour voices, including Chair of the Labour Party and Chair of Labour’s policy review, Anneliese Dodds MP, who highlights that: ‘The climate emergency is the most fundamental challenge facing our country and the planet, and it is inextricably linked to the cost-of-living crisis.’ Alan Whitehead MP, Shadow Energy Minister says: ‘The government has, over the first few months of the price crisis behaved like rabbits in headlights, hoping against hope that the high gas prices would subside.’

Clive Lewis MP, a member of the House of Commons Environmental Audit Committee, argues that the Tories see solutions through “‘free-markets” and don’t actually exist out text books’ where we should be anchoring the energy transition in ‘re-democratising’ and ‘addressing structural inequality.’

Huw Irranca-Davies MS, gives a view from Wales and the different approach the Welsh Labour government is taking. Sarah Boyack MSP from Scottish Labour, points out how progress on renewables in Scotland has come from decisions Labour took when it ran the Scottish government and now the SNP-Green government is found wanting. Cllr Lisa Trickett, shares the benefits that can flow from a net zero neighbourhood.

We have contributions from Graham Peterson of the Green Jobs Alliance, the union coalition supporting a just transition and Alice Bell of Possible who highlights how many problems stem from David Cameron and George Osborne’s decisions to curb renewables under the Coalition government. Melanie Smallman, SERA Co-Chair, also shows what the implications of the government’s failures mean and the greater reliance on volatile fossil fuels. SERA Executive Member Ajai Ahluwalia highlights the size of the opportunity in scaling offshore wind and fellow Executive Member Hywel Lloyd explains how we can all be mini-power stations and energy stores through the energy transition.

As this New Ground outlines, the crisis is not inevitable. It is anchored and made worse by Tory choices. It is why Labour must remain bold and progressive to press the right action from the Conservative government and to outline a difference a Labour government would bring.

This latest Energy Edition of New Ground can be found here.